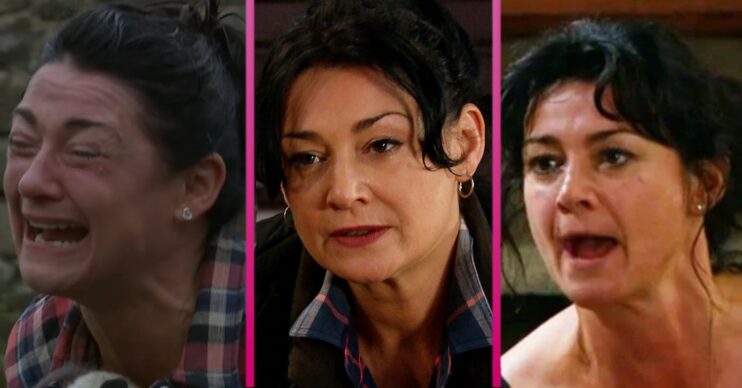 How old is Moira Dingle in Emmerdale? Who has she been married to?

Her age has been the subject of quite some discussion

Moira Dingle has been in Emmerdale since 2009. And she’s seen plenty of drama.

But what’s her story?

How old is Moira Dingle in Emmerdale? Who has she been married to? And how many children does she have?

Moira Dingle in Emmerdale: Who is she and who are her family?

Moira Dingle in Emmerdale was born Moira Woodall in 1971. She fled her abusive home, when her violent father found out her mother was having an affair.

Worried her father would take out his anger on her mother, Moira lied that she was the one having the affair instead and left home, leaving behind little brother Mackenzie Boyd.

Moira married John Barton in 1990 and had daughter Holly Barton a year later.

In 2009 Moira Barton moved to Emmerdale with husband John and their three children Holly, Adam and Hannah

Who has Moira Dingle been involved with?

But she and John eventually put their troubles behind them and reconciled.

They decided to spend the night in a hotel to cement their rekindled romance, but John’s car hit black ice on the way to the hotel and plunged off the road. John died.

When that romance ended, she got back together with Cain and despite some meddling from son Adam, she and Cain married in 2014.

When Moira and Cain split in 2016, Moira had a one-night-stand with nephew Pete Barton and when she gave birth to son Isaac, he thought he was the dad.

But Moira confessed she’d slept with Cain around the same time and he was the father of her baby.

She and Cain reconciled once more but their romance came unstuck again when Cain’s secret son Nate seduced Moira.

Moira and Cain – known as Coira to fans – are together again now but for how long?

James Barton – Moira’s former brother-in-law – came to the village with his sons Ross, Pete and Finn Barton in 2013.

His estranged wife Emma Barton followed but it soon became clear that Emma was troubled.

A few months later, after a gripping whodunnit, viewers discovered that Moira was the one to push Emma.

She had just given birth to a baby she didn’t know she was expecting and Emma had kidnapped the child, believing it to be her grandchild.

Emma then taunted Moira saying she was responsible for Holly’s death and Moira snapped and pushed her.

It was clear Emma had been goading Moira to kill her as she didn’t want to live.

Moira wanted to confess but son Adam took the rap instead.

Moira’s children Holly, Adam, Matty and Isaac have given their mother some headaches over the years.

And it produced one of the most heartbreaking episodes of Emmerdale of all time, when Moira found Holly dead one morning in September 2016.

Adam Barton’s bolshy behaviour gave Moira trouble but he settled down with Victoria Sugden and came to terms with his discovery that his father wasn’t the man he thought – John Barton – but was in fact his ‘uncle’ James Barton.

Adam took the blame for Emma Barton’s murder and was forced to flee Emmerdale forever.

Moira’s relationship with Matty was tricky when Matty first returned to the village surprising his mum who didn’t know he was transitioning. But the pair are now as close as they were before.

Little Isaac Dingle had a dramatic start to life in October 2017.

Moira went into labour after a confrontation with Emma Barton, when she was trapped in a burning barn at Butlers Farm. Emma helped Moira escape and delivered the baby.

Moira and Faith in Emmerdale

Faith, however, won’t tell anyone else.

Moira has found herself having to support Faith through hospital visits and heartbreak.

And although it’s bought the mother and daughter-in-law together in a strong relationship, Moira knows she has to tell Cain sooner rather than later.

Instead, however, Faith tells a huge lie about Moira to stop the truth coming out.

How will Moira react?

How old is Moira Dingle in Emmerdale?

Moira’s age in Emmerdale has confused viewers for quite some time.

When Moira marked 30 years since she married first husband John in January 2020, fans were quick to comment.

“30 years since Moira married John? How old is Moira?” asked one.

“30 years ago Moira was married? Wait, how old is she?” added another.

And when her younger brother Mackenzie Boyd came into the show in 2020 confusion reigned again.

Moira revealed she had left the family home when she was 18 and MacKenzie was 10. This means there is an eight year age gap between them, even though he’s being painted as much much younger.

Moira was born on April 25 1971, which means her recent birthday celebrations saw her turn 51.

She first married John when she was just 18.

Meanwhile, Natalie J Robb, who plays her, was born on December 8, 1974, so at 47 she is four years younger than her alter ego.