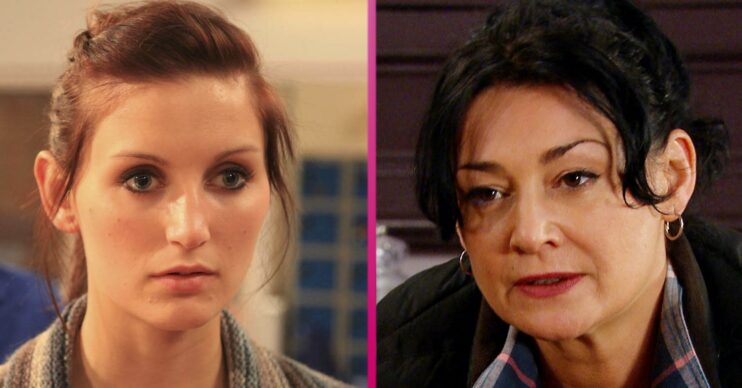 Emmerdale: Who was Moira’s daughter Holly Barton? How did she die?

But who is Holly, how did she die and what was her connection to Suzy?

Who is Holly Barton in Emmerdale?

Holly is the daughter of Moira Dingle and John Barton. She is also the older sister of Matty and older half-sister of Adam and Isaac.

Holly got into drugs when she was a teenager at college and by age 19 she was an addict.

Holly’s friend Roz supplied her with the drugs and she ended up overdosing on a night out. However Aaron Dingle found her in time.

Later, Holly and Roz were looking after Ashley and Laurel’s kids when Holly insisted on taking cocaine.

When the couple returned home Laurel was suspicious of her behaviour and later they found a wrap of cocaine.

Holly blamed Roz for the cocaine. But Roz was furious and told Moira and John about Holly’s drug problem.

Holly continued to struggle with addiction and eventually Moira tried to wean her off it slowly. But when John offered to take the drugs with her, Holly decided it was time she got help.

After John’s death, Alex Moss found Holly in a barn with drugs she purchased from a dealer. He managed to take them off her.

But later Cain found her unconscious at the garage with drugs beside her and took her to hospital.

When she woke up she told her family it was a one off and began to see a drugs councillor.

Holly returned to the village and stole Cain’s car to try and pay off her drug addiction fines worth £2000.

But Cain, who was now Holly’s stepdad, soon saw Holly’s drug dealer off.

In May 2016, Holly kissed Cain and when Moira found out, she made out Cain was the one who tried it on with her.

When Cain and Moira rejected her, Holly relapsed on heroin.

This time she was found by her cousins Ross and Pete. Moira tried to send her to rehab.

How did Holly die in Emmerdale?

Eventually Holly got clean again and wanted to pursue a career in photography. She landed a job at Take A Vow and took the photos for David and Tracy’s wedding.

She also formed a friendship with Jai Sharma which turned into a relationship and they planned to go public as a couple.

The two even attended Holly’s friend’s wedding together, where Holly was the photographer.

But after returning from her friend’s wedding Holly went to her room.

The next day, Moira went to wake her up, but she found her daughter dead and a heroin wrapper on the floor.

Her death left her family devastated.

What is Holly’s connection to Suzy?

During a meeting with Moira, she recognises a photo of Holly and makes her excuses to leave.

Suzy later opens up to Leyla. But how did she know Holly?

We know Suzy and Leyla have secretly been doing cocaine. Could Holly and Suzy’s connection be drugs related? Or is it something else?