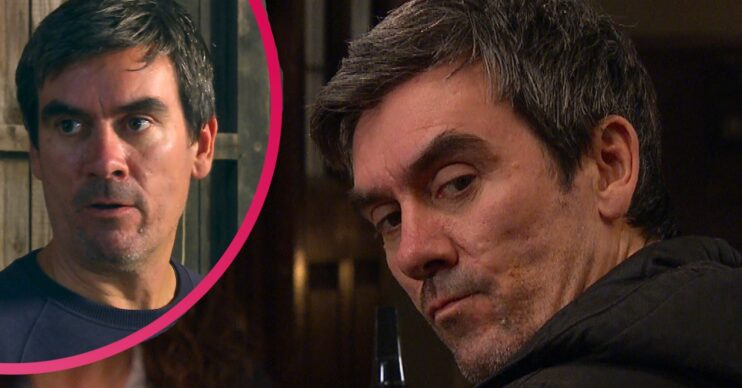 Who is Cain Dingle in Emmerdale? Is he a murderer?

He's the grumpiest grandad in Emmerdale but is he a murderer?

Cain Dingle in Emmerdale is the son of Zak and Faith Dingle, and half brother to Chastity, Sam and Belle.

He’s been part of Emmerdale history since he first arrived in the village back in 2000.

Since then he’s got to know daughter Debbie, become a dad again and a grandad, discovered the son he never knew he had, and the dad he didn’t know was his dad, got married and divorced, had many steamy affairs and got messed up in all sorts of dodgy Dingle dealings.

So what’s his story? And is there a heart lurking under that grumpy exterior or is he really a murderous villain?

Who plays Cain Dingle in Emmerdale?

Cain Dingle in Emmerdale is played by actor Jeff Hordley.

He’d been in many television shows playing small roles when he landed the part of Cain in 2000. He took a break from Emmerdale in 2006 and took on roles on the stage, and in panto, before he returned to the soap in 2009.

Cain Dingle arrived in Emmerdale for his cousin Butch’s funeral back in 2000 and almost immediately got involved with policewoman Angie Reynolds.

His romance with Angie was initially revenge for her part in Butch’s death but he developed feelings for her and he was devastated when she died in a car accident.

It wasn’t long before Cain was in another toxic relationship. This time with Sadie King – Jimmy King’s ex-wife.

The pair were as bad as each other and their romance left three people – including Bob Hope’s daughter Dawn Woods – dead when the Kings River development show home exploded.

When did Cain date Charity?

Of course, Cain is half of one of the most famous Emmerdale couples along with Charity Dingle.

The pair – who are parents to Debbie Dingle, after Charity gave birth as a teenager – have been on, off, on again, off again for years.

But after many years of disastrous romances the pair seem to be happy just being friends.

Is Moira his one true love?

Cain Dingle in Emmerdale and Moira Barton had a brief affair when her husband John was still alive.

They got back together at the start of 2013, and got married.  But when Cain cheated with Charity, Moira filed for divorce. She didn’t know at the time that she was pregnant and when she gave birth to baby Isaac it took a DNA test to confirm that Cain was the dad.

Gradually, Cain and Moira grew close again and got back together. But when Moira had an affair with farmhand Nate, things fell apart.

And it got even worse when a dramatic confrontation revealed that Nate was actually Cain’s son, and he’d seduced Moira in revenge for his dad abandoning him. Dark!

Emmerdale fans, though, were delighted when Cain and Moira got back together once more and for now Coira seem happy together.

How many children does Cain Dingle in Emmerdale have?

Cain is dad to Debbie Dingle – whose mum is Charity – and grandad to her children Sarah and Jack.

He’s also got young sons Kyle, whose mum is Amy Wyatt, and Isaac with wife Moira.

And his oldest son, by ex-girlfriend Cara Robinson, is Nate Dingle, who himself is a new dad to baby Frankie.

Is Cain a killer?

Despite Cain’s reputation as the protector of the Dingles and someone that shouldn’t be messed with, the jury’s out on whether he really is a murderer.

He unwittingly damaged a gas pipe at the Kings River show home that led to the fatal explosion. But was he really to blame or was it Jimmy’s dodgy repair job?

Cain did attack his dad Zak and leave him for dead, but Zak didn’t actually die, did he?

He was also thought to have killed Debbie’s fiancé Joe Tate when he punched him for jilting Debs and Joe hit his head.

But as it turned out, Joe wasn’t dead after all.

But with Al in his sights, could Cain turn killer one day?

Something triggers Cain this week when he kidnaps Al Chapman.

Upon hearing Al is threatening his family set-up by trying to seduce Chas, Cain takes him hostages and pretends to poke a blindfolded Al in the chest with a gun.

But Chas has found out what’s happened and is on her way to stop her brother. Will she get there in time – or could Cain kill for real on this occasion?