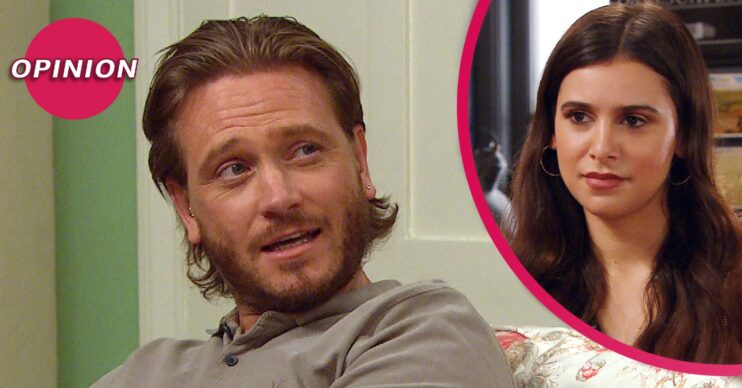 OPINION: Emmerdale: ‘I told you David has ridiculous taste in women’

David has bad taste in women

Emmerdale character David Metcalfe has been on the show since 2006 and over the years he has made some questionable choices.

In 2018 he began a relationship with Maya Stepney, however it turned out that the school teacher had been grooming his son Jacob.

After everything that happened with Maya he went on to date Meena. While Meena seemed fairly normal at first, it soon turned out that she was a murderer.

While villagers have no idea that Meena is a killer, she continues to manipulate David and others around her.

But is David the worst judge of character ever? This is what Entertainment Daily soap writer Charlotte Rodrigues has to say.

Emmerdale: ‘David is the worst judge of character’

While David has a lovely nature and is a good dad to his kids, I can’t help but want to scream at him: “OPEN YOUR EYES YOU MASSIVE IDIOT!”

I mentioned that David previously dated Maya Stepney, who as Emmerdale fans know, turned out to be a paedophile.

Not only did she groom Jacob when she was with David, she fell pregnant. The baby turned out to be David’s son and she left him with David before leaving the country.

This left David very guarded about who he decided to date next, for understandable reasons.

However when Meena came to the village she immediately expressed interest in David and soon the two began dating.

And they lived happily ever after… just kidding, this a soap!

Of course Meena couldn’t be a normal person, because that would be boring. It was recently revealed that Meena killed her so called ‘best friend’ Nadine Butler.

However when Leanna Cavanagh found this out, Meena decided to push her off a bridge. On her 18th birthday too! Bit harsh.

So somehow in the space of three years, David managed to date a paedophile and a murderer.

One of his exes liked to abuse children and his current girlfriend likes to kill them. Great choice in women David! Who you going to go for next? A tory. (That was a joke).

But seriously, how has David not noticed there’s something off with Meena? You would think after dating a paedophile, he would be able to pick up more on red flags.

Not only is it obvious she’s jealous and controlling, but she very clearly has no feelings of empathy for anyone.

‘David, stop cheating on your girlfriends’

Another topic I want to touch on while you’re all here is David cheating on his girlfriends.

Seriously, I’ve lost count of how many times he’s cheated. Yes, I know Meena’s a killer, but he doesn’t know that and it seems like his answer to everything is to drop his pants.

Over the last few weeks David and Victoria have grown even closer.

In recent scenes, David saved Victoria from being shot in a siege during the hide. Victoria was devastated that he had been hurt.

Jacob suspected that David has been having an affair with Victoria and begged his dad to just choose who to be with.

Knowing David, he won’t make the right choice, and even if he did, he’d cheat.

But I guess we’ll have to see how things play out.