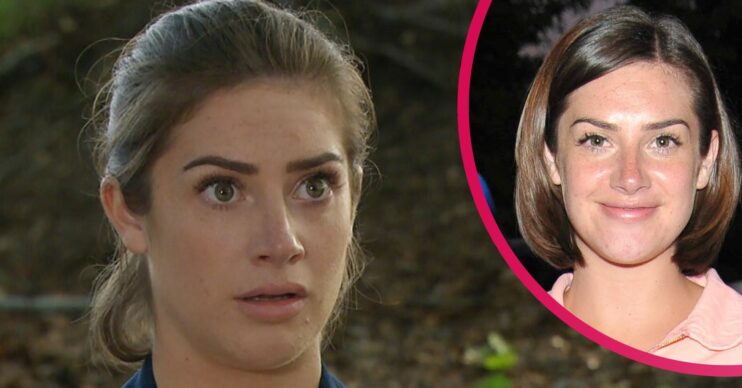 Who plays Victoria Sugden in Emmerdale? How old is she?

Isabel Hodgins has been in the soap for 16 years

Victoria Sugden in Emmerdale was born into the show’s most iconic family.

She immediately made her mark when her cries woke her grandmother Annie Sugden from the coma she’d been in since the infamous Beckindale plane crash in December 1993.

But who is Victoria? Who plays her? And how old is she?

How old is Victoria Sugden in Emmerdale

Victoria is the daughter of Jack and Sarah Sugden, sister of Robert Sugden and adopted sister of Andy Sugden.

She’s close to her stepmum, Diane Sugden. She’s been in Emmerdale her whole life – played by three different actresses, most recently Isabel Hodgins.

She struggled when her mother Sarah was killed in an explosion at the farm but when dad Jack began a romance with the landlady of the Woolpack Diane Blackstock, and later married her, Victoria was thrilled.

Vic – as she’s known to her family and friends – was a wild teenager. She and her friend Kayleigh Gibbs caused havoc in the village, spreading rumours and terrorising pensioner Edna Birch.

After a holiday with family in Spain, Victoria returned – just as badly behaved as before.

She and Kayleigh went clubbing but Vic left early and grabbed a lift home with Billy Hopwood.

When Billy’s brakes failed, he crashed into a lake, leaving poor Vic with a lifelong fear of water.

And poor Victoria had more to fear than the water, when she fell into a frozen lake and came face to face with the corpse of dodgy police officer Shane Doyle.

Victoria Sugden in Emmerdale has definitely had more than her fair share of bad boyfriends.

She lost her virginity to foster brother Daz Evans, who was two-timing her. Had a brief fling with Aaron Livesy (now Dingle) who was struggling with his sexuality – and later became her brother-in-law (awks).

Then she fell for flirty farmhand Alex Moss, only to discover he was keen on his boss, Moira Barton.

But then Victoria met Adam Barton and the pair fell in love.

After a short break up, Adam won Vic back, and they seemed happy. Until Victoria discovered Adam had slept with Vanessa Woodfield and got her pregnant –  or so he thought.

Broken, Victoria went on a downward spiral which ended when she accidentally ran over vicar Ashley Thomas.

Thinking she’d killed him, and crippled with guilt, Vic handed herself in to the police. But Ashley recovered – phew! – and Victoria was released.

With her romance with Adam well and truly back on, Victoria was delighted when the pair tied the knot. They wanted to have a baby but when Victoria didn’t get pregnant, they found out that Adam was infertile. Upset, Adam ended their relationship.

The pair rekindled their relationship in October 2017, but when they rushed to Butler’s Farm to tell Moira the good news they found her in a burning barn, having just given birth to baby Isaac!

And the events that followed – Finn Barton’s death and Emma Barton‘s fatal plunge from the viaduct – finished their relationship forever.

Adam took the blame for Emma’s death, covering up for mum Moira. When he left, Victoria was devastated.

In April 2019, Emmerdale aired a major week of episodes dubbed the Big Night Out which left many mysteries to be answered in flashbacks a few weeks later, and changed some characters’ lives forever.

Victoria met a man called Lee Posner on the night out.

He walked her home and came inside. But when she asked him to leave, he refused and raped her. Victoria later found out she was pregnant and decided to keep the baby.

Brother Robert, though, struggled with her decision and ended up attacking Lee. Lee was in a coma and then died. And Robert went to prison.

Later Vic struck up a friendship with Lee’s brother, Luke.

And when baby Harry was born, she allowed Luke and his mother, Wendy, to be part of his life. Her friendship with Luke became a romance though she found it hard to be intimate.

And their relationship hit a rock when Luke told Vic that he’d slept with a man before he met her. But the pair talked it through and decided to give things a go.

However, after discovering Luke could have played a part in Lee’s death and therefore her brother might be in jail for nothing, Vic couldn’t be with Luke any longer and ended things.

Who is Victoria Sugden’s boyfriend in Emmerdale?

Victoria has since moved on with David Metcalfe.

The pair bonded over both raising young children and began sharing childcare responsibilities.

It soon became clear their friendship was blossoming into something more, but he was dating Meena Jutla.

The sensible thing would have been to end things amicably, but David decided to deny his feelings for Vic and stick with Meena.

Does Victoria die in Emmerdale?

Meena, however, knew exactly what was going on and decided to kill Victoria for stealing her man.

Meena tried to drown Vic during the survival week challenge, but was thwarted by Andrea Tate, who spotted her.

Andrea then became Meena’s next victim and Victoria survived.

Victoria and David then fled to Portugal and spent three months there building their relationship.

Speculation was rife that the pair wouldn’t return after actors Isabel Hodgins and Matthew Wolfenden were allegedly embroiled in a race row on set.

However, after the three-month break, David and Victoria returned to screens at the end of January and are now living together in the Dales as a family.

Meanwhile, Meena is behind bars – for now.

Who plays Victoria Sugden in Emmerdale?

Vic is played by Isabel Hodgins.

She is the third actress to take on the role. Jessica Heywood played her as a baby from 1994 to 1997.

Isabel then took over the role when she was just 12 years old as Vic became involved in more mature plots.

In fact, just before getting the role of Victoria, Isabel almost threw the towel in on her acting career.

Despite only being 12 years old, being away from home was too much for her and she decided to give it all up.

“I met these extremely ridiculously talented people who were my age and could do things I couldn’t do,” she told The Mirror in 2019.

“I struggled, I was so homesick so I was going to leave at the end of the year. Then I got the ­audition for Emmerdale and every northern girl in my year went for it and I got it. It was perfect.

“If I hadn’t got Emmerdale I don’t know what would have happened. It was kind of fate.”

Who is Isabel Hodgins with in real life?

Isabel is currently believed to be single, telling The Mirror in her 2019 interview she was “enjoying being by herself”. But she has dated a co-star in the past.

In 2016 she confirmed she was in a relationship with Michael Parr. He played Ross Barton, Vic’s on-screen brother-in-law.

The couple confirmed their romance by posting snaps from the same trip to Paris on their social media accounts.

They dated for four years, but were rocked by rumours Isabel had cheated with another of their co-stars, Danny Miller in 2016.

A source told The Sun: “Isabel and Danny thought they could keep their romance secret but when Kirsty-Leigh saw the texts on his phone, the game was up. She was furious.

“Michael was also angry. He thought he and Danny were close friends.”

It apparently split the Emmerdale cast in two, with most siding with Michael.

Neither Michael, nor Isabel commented on the rumours at the time, but they stayed together.

They eventually split up in 2019 after Michael left the soap and decided to try to crack America.

A source told The Sun newspaper at the time: “They drifted apart and felt it was better to be mates.

“He has been throwing himself into his social life and has just been on a lads’ hol and she is focusing on work.

“They’re both young and want to follow their dreams. They had a meaningful relationship and they’ll remember the good times.”