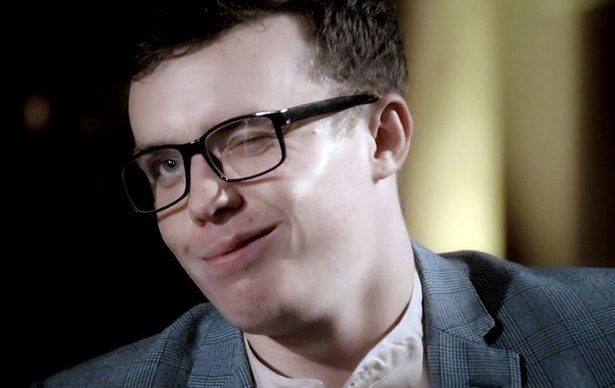 Emmerdale: What is Vinny’s real identity?

It’s been revealed by Emmerdale that Vinny is not actually Mandy Dingle’s son.

As Mandy told the story of how she and Vinny got into trouble with Casino owner Terry on Tuesday October 29, she repeatedly told her family how she would do anything to protect her son Vinny.

But as the episode came to an end, after Mandy reiterated how the Dingles always protect their own Vinny said: “But what if they find out you’re not my mum? So I’m not one of their own.”

Obviously, viewers were left questioning WHO he is and they have came up with a few theories.

Vinny is Emily and Paddy’s son?

After ending his marriage with Mandy, Paddy moved on with Emily Wylie.

The pair were desperate for children and after a few false starts fostering they eventually fostered Debbie Jones, who later turned out to be Cain and Charity Dingle’s daughter.

Paddy went onto have an affair with Viv, and eventually he and Emily split.

She left the village in 2005 with Debbie’s daughter Sarah but returned and brought the little girl back in 2006.

She briefly returned again in 2008 but hasn’t been since.

Meanwhile Paddy has stayed in the village and is now in a relationship with Mandy’s cousin Chas.

After losing their daughter baby Gracie last year, the pair were thrilled to welcome a daughter last week, who they called Eve.

Theories of Vinny being Paddy’s son circulated when the character made his first appearance earlier this year.

Could Vinny be Paddy’s son, but with Emily instead of Mandy? 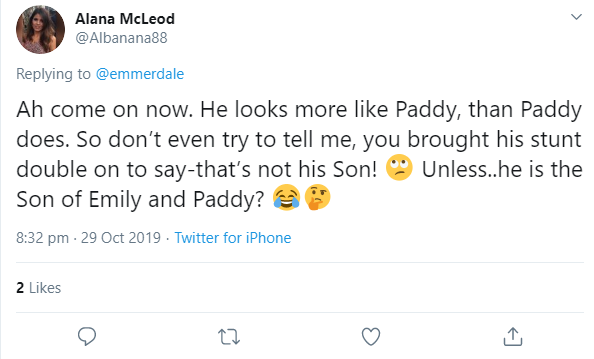 Vinny is related to Paddy and Bear?

There was a theory that Vinny was Paddy’s son when he first appeared, but could he actually be Bear’s son?

Mandy originally said the reason for her return earlier this year was to tell Paddy about the love letters between his mum and wrestler Bear Wolf.

This eventually led to Paddy and Bear doing a DNA test which revealed Bear was biologically his father.

Could Vinny also be one of their family members?

Vinny is another long-lost son of Cain?

Recently Cain found out his wife Moira has been cheating with farmhand Nate Robinson.

He got a huge shock when it turned out Nate was his long-lost son from a relationship he had before his life in Emmerdale.

Although it does seem far-fetched that Cain would have two long-lost sons, it still seems to be a popular theory with fans.

Vinny is another long-lost son of Charity?

Last year Charity revealed that she had another child.

After she gave birth to her daughter Debbie, her father threw her out of their home and she was held hostage by police officer DI Mark Bails, who along with his friends, repeatedly raped her.

Charity found out she was pregnant again at 14 and not long after she escaped Bails, she gave birth to a baby boy in hospital.

She believed he had died and ran off upset and blaming herself, but it was revealed her son Ryan had survived and was adopted by the midwife, Irene Stocks.

Since tracking Ryan down, he has become a regular on the show.

With Charity’s involvement in Mandy and Vinny’s scheme being revealed to viewers, some think Vinny could be her son.

Is it likely that Charity has another long-lost son?

So Charity has another kid then?

However, something that could cancel out both of these theories is the face Vinny did say “so I’m not one of their own” implying that he isn’t a Dingle.

But you never know in Soapland…

One viewer did point out he could be Lydia’s son.

Earlier this year it was revealed Lydia Hart’s real name was Jenny Finn.

When she was 15 she fell pregnant and kept it a secret fearing her baby would be taken away from her due to the fact she was young and lived in a care home.

But when she gave birth, her baby boy was born sleeping and she buried him in a wooded area before running away and stealing another woman’s identity.

However the idea of Vinny being Lydia’s baby is nearly impossible as the baby’s remains were found as that was what kicked off the storyline.

But could he be another one of Lydia’s son, though?

An Entertainment Daily theory is that he could just be a conman working with Mandy.

He was involved with her casino scheme, maybe they’re just partners in crime?