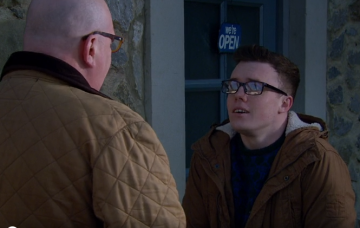 No one knows who Vinny really is

Viewers of Emmerdale have a theory as to who Mandy’s “son”, Vinny, really is.

Fans have come up with a theory that Vinny’s real mum may already be in the village – and is connected to the Dingles.

The theory is Vinny is the son of Lydia Hart aka Jenny Finn.

On the ED! Facebook page one person queried: “He couldn’t possibly be Lydia’s son who she thought had died – could he?”

Another added: “I think it’s the son of Lydia – maybe the baby didn’t really die.”

Over on a Digital Spy forum discussing the shock twist, another added: “It’s Lydia!”

Viewers know when Lydia was a teen, she hid her pregnancy fearing her baby would be taken away from her, but when she gave birth to her son, he was born sleeping.

I think it’s the son of Lydia – maybe the baby didn’t really die.

There are other theories floating around though – one that Tina Dingle is his real mother.

One fan wrote on ED!’s Facebook page: “Here’s an idea for you, storyliners: his mother is Tina Dingle, who disappeared towards London several years ago, and hasn’t been seen or heard of since!”

Another thought he could be Marlon’s son: “Is that Marlon’s son and she’s looking after him for someone?” they asked.

And others think he IS Paddy’s son, but with his second wife Emily Kirk.

Like Mandy, she also married Butch Dingle and Paddy Kirk. Could she be Vinny’s mum?