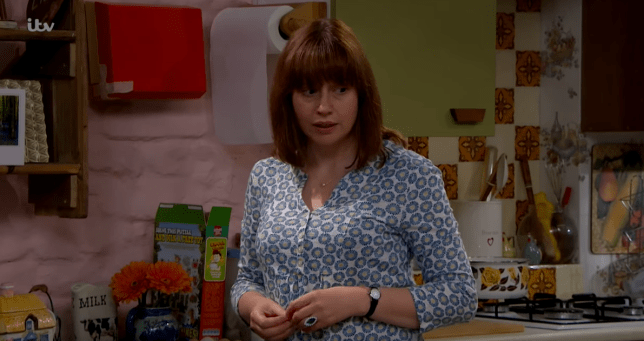 Her real name is Jenny Finn

Emmerdale’s Lydia Hart has a secret from her past which is so traumatic that she hasn’t told anybody about it.

On Thursday (July 4), ITV viewers discovered that the bones buried at the school were those of Lydia’s dead baby.

And it’s only a matter of time before fiancé Sam and the rest of the Dingle clan find out the truth about Lydia’s past – although we now know her real name is Jenny Finn.

Earlier this week, the residents of the Dales got a shock when Jessie Dingle was called to the school to be told some disturbing news.

The remains of a body had been found on the school premises and the police had been called.

Many Emmerdale viewers suspected Lydia, as her past has rarely been discussed and she appeared to be acting suspiciously when Jessie announced the news in The Woolpack.

But it was still a brutal blow to soap fans when the news was confirmed that the baby bones are in fact those of Lydia’s child.

Police investigators had managed to age the bones and attribute them to the child of a person called Jenny Finn.

The teenage girl had run away from care home Hotten Grange – which used to be on the school site – at the tender age of 16.

While viewers noticed the resemblance between Lydia and Jenny straight away, the police haven’t yet made the connection.

But with a press conference to launch an appeal for information being lined up, it won’t be long before Jenny/Lydia’s picture is made public.

So why didn’t Lydia’s dead baby get a proper burial? And why has she changed her name, but stayed in the village where her old memories are bound to haunt her?

Fans were shocked and excited about the storyline, with one tweeting: “Well, Lydia is Jenny like we all thought. Looking forward to this big story for Lydia!”

Well, Lydia is Jenny like we all thought. Looking forward to this big story for Lydia! #Emmerdale

Omg the bones are connected to Lydia #Emmerdale

It’s Lydia. We all knew #emmerdale

Another said: “Oh dear, Lydia’s going to be plastered all over the news. Good to finally get a back story about her @Emmerdale @karenblick.”

“Looking forward to watching Lydia’s story evolve… I can only imagine there’s going to be all sorts of emotions going on and @karenblick will smash it. #Emmerdale,” said one more.

Will Lydia’s secret be revealed tonight?

Did you guess Lydia was connected to the baby bones? Leave us a comment on our Facebook page @EntertainmentDailyFix and let us know what you think!