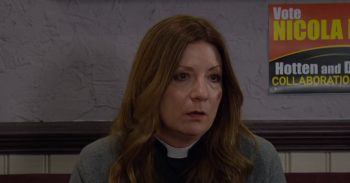 Emmerdale viewers have a theory that Harriet Finch is pregnant!

She slept with Will recently

Emmerdale viewers have come up with a surprising theory about vicar Harriet Finch – she’s pregnant with Will Taylor’s baby!

It comes after criminal ex Will came back into her life and turned it upside down when she realised she still had feelings for him.

Harriet was married to Will before her life in Emmerdale, but he knew her as Michelle.

Harriet was an undercover police officer, looking into Will who was a well-known drug dealer. She ended up marrying Will and becoming a mother figure to his daughter, Dawn.

However, Will was eventually arrested and at his trial he learnt that Michelle was actually an undercover police officer named Harriet, but he never told Dawn.

Last year Dawn arrived in the village and recognised Harriet as her former stepmother. Eventually Dawn ended up moving in with Harriet and it was believed that Will had died at a halfway house a couple of years prior.

It turned out that Will had survived and arrived in Emmerdale to terrorise Harriet. He enlisted Dawn’s help but they were eventually caught out.

When Will came to talk to Harriet, the pair ended up sleeping together, leading some viewers to think that the vicar may be pregnant.

#emmerdale Harriet ends up pregnant. I know she does.

I’d love 2 see Harriet pregnant and maybe that brings them all together ? 👀❤️❤️ @emmerdale

But in their absence, Will befriended Dan Spencer telling him he was called “Taz” and managed to get a job at Barton and Dingle Automotives.

Read More: Emmerdale’s Isabel Hodgins reveals she felt “really vulnerable” when her character Victoria revealed she had been raped

Last week, when they returned, neither Dawn not Harriet were happy to hear that he had a job in the village, and Dawn told him he could work there but she didn’t want to interact with him.

However, it didn’t stay secret for long as Harriet’s former flame Cain Dingle, who runs the garage, heard who Taz really was and fired him.

She was left even more furious when she found out that Harriet was never seeing Jai and had slept with her dad.

She planned to move out of Harriet’s house but her former stepmother convinced her to stay.

Do you think Harriet could be pregnant? Leave us a comment on our Facebook page @EntertainmentDailyFix and let us know what you think.