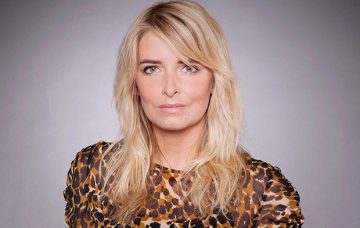 There’s one thing you definitely can’t accuse Emmerdale landlady Charity Dingle of being – and that’s boring!

Since her arrival in the village in 2000, she’s had a more colourful life than almost everyone else in her family put together, with multiple-marriages, long-lost children turning up, and more skeletons in her closet than there are in the village graveyard.

After spending a lifetime being used and abused by men, she’s finally found her soulmate in Vanessa Woodfield, and Emmerdale fans can’t wait for the pair to finally get married.

Read more: Emmerdale’s Robert and Aaron: A history of their relationship

How many children does Charity Dingle have?

Charity gave birth to her daughter Debbie when she was just 13, after falling pregnant to Cain Dingle. But Charity was forced by her dad to give up Debbie shortly after she was born.

Debs came back into Charity’s life 12 years later, when she was fostered by Paddy and Emily Kirk. Mother and daughter have had a rocky relationship since then, and are often not speaking for one reason or another!

Charity had her her second child, Ryan, when she was 14, after becoming pregnant as a result of sexual abuse.

Charity believed he had died shortly after birth. It wasn’t until Charity needed evidence for the case against her abuser that she tried to find out the details of her son’s death – and discovered he was actually alive.

She and Ryan were reunited, and are still building their mother/son relationship.

Charity’s second son, Noah, was born while she was in prison, having been charged with his dad Chris Tate’s murder!

At the time, there were three contenders to be Noah’s father, Chris, Cain and Marlon. But a DNA test proved that Noah was a Tate through and through.

After being acquitted and released from prison, Charity gained custody of Noah. But the teenager often feels neglected by his mum, who spends more time scheming than looking after him.

Charity’s youngest son, Moses, was also born behind bars. Charity was in prison for perverting the course of justice, and had kept her pregnancy hidden from everyone.

Moses’ dad turned out to be Ross Barton, the on/off boyfriend of Charity’s daughter, Debbie!

What is Charity Dingle’s relationship with Cain Dingle?

Charity and her cousin Cain first hooked up when they were just 13 years old – and have had a love/hate relationship ever since!

After Cain realised that Debbie was his and Charity’s daughter, the three of them began to spend more time together. This led to Cain and Charity having an affair – even though Charity was married to Chris Tate at the time.

When Charity got engaged to Tom King, Cain colluded with Sadie King to split them up – and accepted money from her to kiss Charity, so Sadie could capture it on camera.

A few years later, when Charity learned that Cain had stolen money from the Kings, she teamed up with Carl King to get it back.

She faked a reconciliation with Cain in order to find out where the money was – but when he realised what she was up to, he handed it over anyway.

Charity later proposed to Cain. With the help of his sister Chas, Cain organised a surprise wedding – however, Charity refused to go through with it, insisting she wasn’t ready to settle down.

Cain and Charity went into business together – stealing cars and selling them to make money! But things turned sour between them again when she discovered that he’d slept with Faye Lamb.

Cain went on to marry Moira, much to Charity’s upset. When the pair split for a while, Charity was Cain’s shoulder to cry on – and they planned to run away together to visit their daughter, Debbie, in France.

But when Cain changed his mind at the last minute, realising he was still in love with Moira, Charity was furious – and faked her own suicide.

These days, Cain and Charity are both happy in their respective relationships. But their lives will always be intertwined through Debbie and their grandchildren, Sarah and Jack.

Charity did go to prison for Chris Tate’s murder, although she wasn’t guilty of the crime – he had framed her.

Charity married Chris in 2001, and she had already had an affair with his sister Zoe before they got hitched.

Zoe had tried to blackmail Charity into signing a pre-nup, threatening to reveal their fling if she didn’t. But Charity beat her to it by telling Chris herself. He forgave her, and the wedding went ahead as planned.

Chris knew that Charity was a flirt, but her cheating ways didn’t end there. And when Chris discovered that she’d been sleeping with Cain behind his back, he was furious!

Chris threw Charity out of Home Farm, but ending their marriage wasn’t enough. He’d just discovered he had an inoperable brain tumour, so he decided to commit suicide – and frame Charity for his murder.

Charity was arrested after the police found her fingerprints on the glass Chris used to drink his lethal cocktail – and with Charity’s signature on an order for the poison, her fate was sealed.

After a DNA test proved that Noah was Chris’ son, Charity agreed to hand the boy over to Zoe – in return for Zoe providing evidence that Chris killed himself.

Charity was eventually cleared of the crime, and won back custody of Noah. But that wouldn’t be the last time she would get banged up…

How many times has Charity Dingle been married?

Chris’s plotting didn’t put Charity off getting wed again – in 2012 she tied the knot with factory head honcho, Jai Sharma.

The pair were happy together for a while, although Jai was disappointed when Charity dropped the bombshell that she didn’t want anymore children.

The arguments the pair had over the subject led them both to cheat – Charity with Declan Macey, and Jai with Rachel Breckle. But while Charity admitted her infidelity, Jai kept quiet about his…

Things became more complicated when Jai found out that Rachel was pregnant. Jai’s dad Rishi pretended to be baby Archie’s father, but the truth eventually came out, and Charity ended their marriage.

Charity later teamed up with Declan to blackmail Rachel into leaving the village with Archie. Their plotting led to the pair dating, and when Charity found out she was expecting Delcan’s child, he proposed.

Although the pair married, Charity didn’t want another baby – and had a termination behind Declan’s back. She then faked a miscarriage, blaming a catfight with Megan for the loss of their child.

When Declan found out about the abortion, he took Charity away on holiday to a secluded cabin – where he tried to murder her. He ended up killing his nephew Robbie instead, and later left the village.

As well as being married three times, Charity has also been engaged to Tom King, Cain Dingle, Michael Conway, and her current fianceé, Vanessa Woodfield.

Who sexually abused Charity Dingle when she was a teenager?

Viewers already knew that Charity had worked as a prostitute when she was younger. But in 2018, she admitted to her girlfriend Vanessa that she’d actually been the victim of sexual abuse.

After being thrown out onto the streets by her dad, Charity was picked up by policeman Mark Bails, who gave her a place to stay. But in return, he used to rape her repeatedly – then pimp her out to his friends.

Charity had become pregnant as a result of Bails’ abuse, and began drinking heavily to try to induce a miscarriage. But it didn’t work, and she went on to give birth to a son, Ryan, who she believed died at birth.

When Bails came back into her life, helping her girlfriend’s sister, Tracy, to launch a campaign supporting sex workers, Charity felt she had to speak up. And after revealing Bails’ actions to Vanessa, Charity reported him to the police.

Bails did all kinds of things to discredit Charity, and even tried to turn their son Ryan against her. He was eventually found guilty of the crime, and sentenced to 30 years in prison.

Although Charity has had many relationships with men, she’d also dabbled with women in the past. Even so, everyone was surprised when she fell for local vet, Vanessa Woodfield.

The pair spent a drunken night together after finding themselves locked in the Woolpack cellar, and both vowed to put it behind them.

However, their attraction was strong, and they couldn’t stay away from each other – and they eventually ended up in a relationship.

Their romance was an unlikely one, especially as Charity had already slept with Vanessa’s dad, Frank Clayton! But despite everything, their love has endured.

Vanessa was there for Charity as she relived her abuse ordeal, and got to know her long-lost son, Ryan. And Charity nursed Vanessa back to health after she was stabbed outside the pub.

‘Vanity’ are extremely popular with Emmerdale viewers, who were delighted when Charity popped the question during a romantic proposal that she’d hijacked from someone else!

“You were never a match for me!” Charity muttered after whacking husband Declan over the head in the middle of a lake, and seemingly sending him plummeting to his death!

What’s your favourite Charity Dingle moment? Leave us a comment on our Facebook page @EntertainmentDailyFix and tell us!