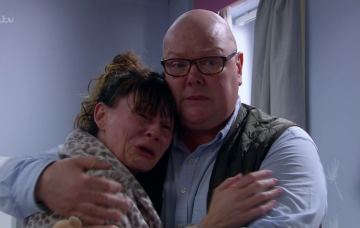 Heartbreaking scenes as Grace was taken away for organ donation...

On Tuesday night (2 October), the grieving couple cradled their child begging for a few more minutes, before handing her to a nurse to be taken away for organ donation.

And viewers were torn apart as they saw the distraught parents struggle with their fate, surrounded by the cries of healthy babies all around them…

Chas was seen cradling her dead baby daughter in her arms, after she was born with bilateral renal agenesis.

After kissing their daughter goodbye and telling her how much they loved her, they “let go” and Grace was taken away by nurses – leaving Chas and Paddy alone with their thoughts.

The heartbroken pair then left the hospital without their daughter and prepared to drive back to the village.

“We can drive around if you want,” Paddy suggested.

“We can drive around for the rest of our lives but it won’t change a thing,” Chas replied.

Tear-streaked fans turned to Twitter to find consolation, with one typing: “The goodbye to baby Grace was heartbreaking. No one should go through that.”

The goodbye to baby Grace was heartbreaking. No one should go through that 😭😭#Emmerdale

Another said: “What torture that would be. Leaving the maternity ward filled with healthy crying newborns when you’ve just lost yours.”

A third spoke for all of us when they wrote: “Aw this is so heartbreaking.”

“They’ll always be someone missing,” said another.

Many fans were quick to praise actors Lucy Pargeter and Dominic Brunt for their portrayal of Chas and Paddy.

One said: “Another absolutely incredible, but devastating, episode of #emmerdale; so well written and such an important story to tell. dom and lucy are beyond talented.”

Chas and Paddy found out baby Grace had little chance of survival when Chas went for her 20-week scan and was told the baby was suffering from the condition bilateral renal agenesis – meaning the baby has no kidneys and underdeveloped lungs.

While she was originally offered the chance to terminate the pregnancy, Chas decided to take the pregnancy to full-term, giving birth to baby Grace with vet boyfriend Paddy by her side.

Did you watch the emotional scenes? What did you think of the storyline? Leave us a comment on our Facebook page @EntertainmentDailyFix and let us know what you think!