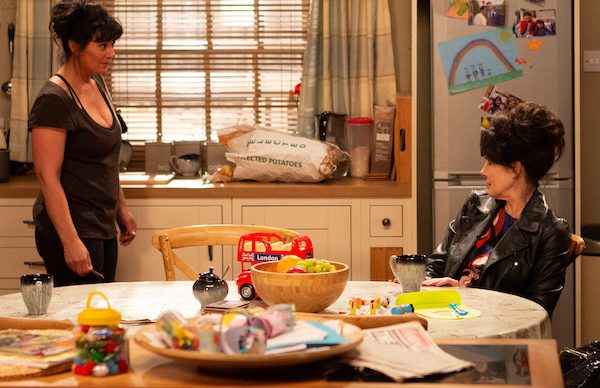 Is the cat out of the bag?

It looks like the end could be nigh for Emmerdale’s Moira Dingle and Nate Robinson next week when Faith Dingle starts to smell rat.

The forbidden pair have been sneaking around behind Cain Dingle’s back for months, catching illicit moments together whenever they can.

But while Cain might have no idea what his wife is up to right under his nose, Faith starts to realise something doesn’t add up and decides to do some digging.

Emmerdale fans will already know that Nate and Moira’s affair has been uncovered by Pete Barton after Moira left her phone behind while she spent a night of passion with Nate in a hotel.

But next week sees Faith decide to reignite the spark between Moira and Cain when she makes a romantic lunch for the married couple.

But her plans are well and truly thwarted when Nate organises a pub lunch for Moira, and the pair head off for their date together, oblivious to what is unfolding at home.

Cain despairs when his mum’s meddling gets them nowhere, but Faith won’t be put off and calls Moira’s mobile trying to get to the bottom of where she’s disappeared to.

When Moria sees she has got missed calls from Faith, she starts to panic and cuts her country pub lunch with Nate short, telling him she needs to get back to the village.

But instead her return makes Faith more suspicious when she sees Moira and Pete whispering in the corner of the cafe.

Pete warns Moira that he won’t keep her secret for much longer, but Faith is intrigued by their sneaky behaviour and corners Pete the following day to find out what they were whispering about.

Faith quizzes Pete about why he has moved into the B&B and although he keeps quiet about the huge secret he is hiding, he warns Moira that her mother-in-law is on to her.

Fed up of lying, Pete is adamant that he won’t fib any longer… but will he tell Faith who Moira is really having an affair with?

And with Faith now determined to find out the truth, will Moira be able to convince her that she’s not cheating on Cain?

Do you think Faith will work out the truth? Leave us a comment on our Facebook page @EntertainmentDailyFix and let us know what you think!