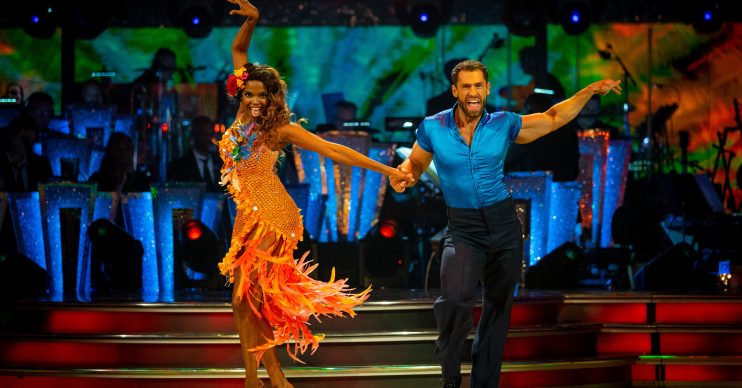 Kelvin Fletcher blew everyone’s socks off – and the rest! – when he first took to the stage in this year’s Strictly Come Dancing.

Despite being a late edition to the BBC show, the former Emmerdale star, 35, certainly proved he has the potential to get to the final.

Now some previously unearthed footage of the actor-turned-racing-driver-turned-dancer proves he’s had those ‘”snake hips” hidden away for years!

A video, posted on Kelvin Fletcher’s Facebook page, shows new dad Kelvin dancing with his baby Marnie back in 2016.

In the short film, a bearded Kelvin can be seen entertaining his daughter by dancing along with her to Ray Charles’ Mess Around.

As Kelvin’s wife Liz laughs in the background while she films the cute father and baby moment, Kelvin’s flair for dancing is apparent.

Emmerdale fans, writing on the Emmerdale Addicts Facebook page, couldn’t help gushing over the video, with one writing: “Gorgeous video, love them both.”

Another said: “Wow grooving daddy with little baby, how cute.”

A third added: “He can even make tracksuit bottoms look sexy,” but another commented that Kelvin “needs better pants”… We can’t think why they were looking down there!

Kelvin, father to Marnie, three, and Milo, nine months, left viewers needing a cold shower when he took to the stage in the first week.

The former soap star, who is partnered with Oti Mabuse, made a BIG impression on both the judges and viewers with his sexy Samba.

The pair earned a phenomenal 32 points… eight each from all four judges!

His second dance saw him win 28 points from the judges, when he performed a slow Waltz to What The World Needs Now.

This week, Kelvin will be doing a routine inspired by Mary Poppins during Movie Week.

He told Strictly host Claudia Winkleman: “I’ve got a three-year-old daughter and the first time I took her to the cinema which was just six months ago, it was to see Mary Poppins Returns, and that soundtrack is on the house constantly, so it’s very special to me.”

Kelvin replaced Jamie Laing, who had to pull out due to injury.

Is Kelvin one of your favourites to win Strictly Come Dancing? Leave us a comment on our Facebook page @EntertainmentDailyFix and let us know what you think!