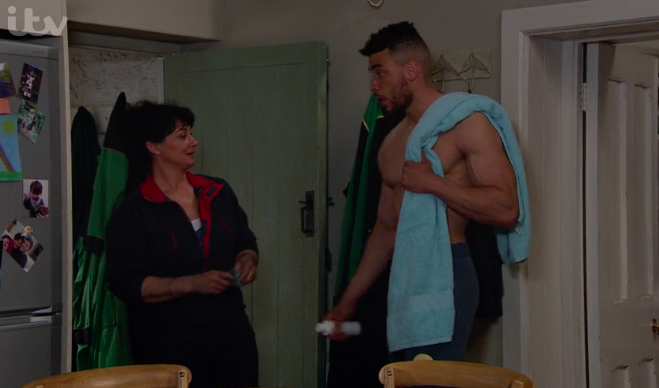 Viewers of ITV’s Emmerdale are not happy as the soap recently confirmed Moira Dingle will have an affair with farmhand Nate Robinson.

Confirming the storyline, Emmerdale producer Kate Brookes said: “Those of you with eyes might have sensed that there is something going on with Nate and Moira, they’re looking over the hay bales at each other and there’s a lot of charged moments.

However fans of the soap are not happy that Moira will be cheating on her husband Cain.

Absolute NO to any affair between Moira and Nate.
If that's the only storyline you can come up with to create 'drama' then go back to the drawing board…not everyone has to be a cheat #Emmerdale

So boring this Moira and Nate thing #Emmerdale

Still no Chemistry between Nate and Moira 🙄🙄🙄🙄 #Emmerdale

Moira and Nate just don’t work. Though I don’t know if he’d work with anyone #emmerdale

In Tuesday night’s episode (July 9 2019) Amy was left furious when her drunk mother kissed Nate, however the pair soon made up.