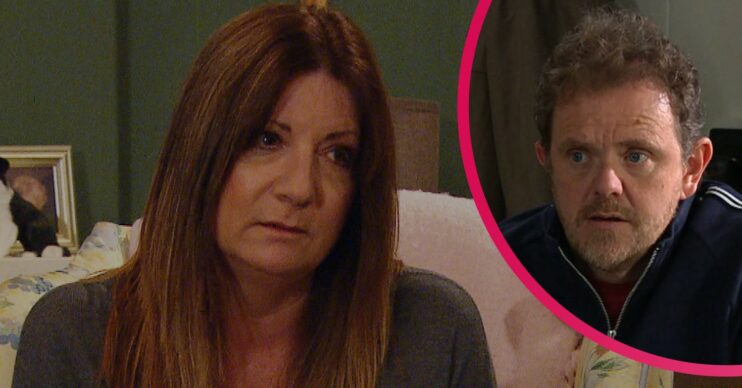 Emmerdale: Where has Harriet Finch been? Fans baffled by her return to screens

Emmerdale aired the return of Harriet Finch last night and fans were left confused over her appearance.

Last month fans were left fuming as Harriet seemingly disappeared from the village, only featuring once in screen in six months.

Viewers questioned where she was and why her absence hadn’t been addressed.

Emmerdale: Where has Harriet been?

Harriet reappeared on Thursday night (September 30 2021) as she paid a visit to Dawn to see how she was after Jamie’s ‘death’.

The vicar had last been seen atoning for her sins in the cellar. She had locked herself down there to reconnect with God after her part in the murder of DI Malone.

Despite this major mental health crisis, some fans thought she might still be in the cellar given she had seemingly been forgotten about for months.

“At last they have let Harriet out of the cellar,” cheered one. Another added: “Glad to see Harriet back, it must have been horrible living in that basement.”

It turns out she’s been living with Dan and Amelia all this time.

But fans were left confused as there was no mention of where she’d been or why she hadn’t been seen for months.

OMG, Harriet! Quick tie her to the table before she disappears for another 6 months!#Emmerdale

harriet where you been girl its been months! #Emmerdale

Oh hello Harriet, where have you been hiding? #Emmerdale 😄

So Harriet was living with Dan & Amelia?

She must have confined herself to the cellar because we’ve not seen sight or sound of her for months. 🤔😂 #emmerdale

@emmerdale where has Harriet been? She’s just appeared from no where but thanked Dan and Amelia for letting her stay? 🤔 #Emmerdale #emmerdale #ITV #itvemmerdale

Where has Harriet even been? #emmerdale

What happened to DI Malone?

DI Malone was a corrupt cop who Harriet began an affair with.

He was blackmailing Will into working for him doing dodgy deals, but Dawn reported Malone to the police.

Malone did not take too kindly to it and tried to force her to take her own life by overdosing on drugs.

Harriet came to Dawn’s rescue, knocking Malone unconscious, but he woke up and Dawn shot him dead.

They buried the body, but later had to move it and Will buried him in the grounds of Home Farm. Malone’s body remains there.

What will Harriet do now she’s returned to Emmerdale?

After Will moved to the groundskeeper’s cottage at Home Farm, Harriet moved back in with Dawn and Lucas. But Harriet is feeling a bit lost.

With new vicar Charles in town, her position at the church feels redundant and she isn’t sure which way to turn.

Harriet is considering rejoining the police after PC Swirling tried to tempt her to apply.

However, given her part in Malone’s murder and cover-up, is rejoining the force really the best idea?

Whatever she decides, we just hope she doesn’t disappear for so long again!