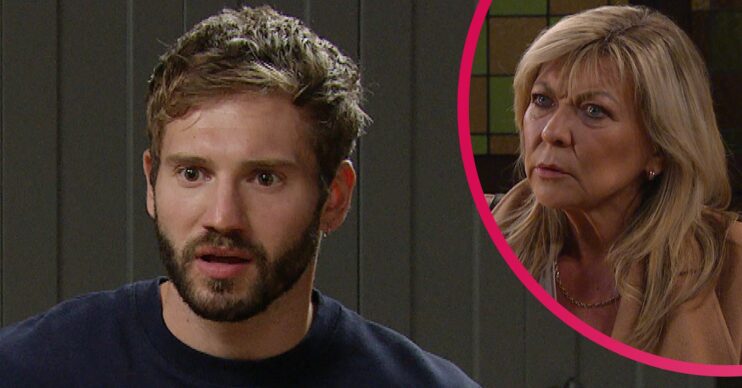 Emmerdale: Where is Jamie Tate as soap ‘confirms’ he is alive?

It doesn't look like Jamie died in the crash...

After going missing when he crashed his car into a lake last week, there has been no sign of Jamie.

But a series of clues have led Jamie’s mum, Kim Tate, to believe he’s still alive.

In episodes airing on Thursday, September 30 2021, Kim was seen receiving flowers. The card with them was signed from ‘J’ with a single kiss.

She insisted to Will that the flowers were from Jamie, as that’s how he always signs his notes to her, but unconvinced, Will suggested perhaps someone else with the initial J had sent them.

Kim immediately realised it could be her step-grandson, Joe Tate, tormenting her over Jamie’s ‘death’. Viewers know there was no love lost between Kim and Joe, but would he be so cruel? (Er, yes, probably!)

However later on, another incident made Kim’s mind up that the flowers were in fact from Jamie and it was proof he was alive.

Confronted by Paddy with the vets’ accounts, Kim was stunned to see the bank balance had been wiped. As Paddy explained only he and Jamie had access to it, it became clear Jamie had taken all of the money and done a runner.

But with no other evidence, as Kim told Gabby her theory, Gabby thought she was going a bit crazy. But viewers certainly seem to agree with Kim that Jamie is definitely alive.

Where is Jamie Tate?

So if he is alive the questions remain: how did he get out of the lake and where is he hiding out?

He’s obviously got money from the vets’ to tide him over, but the chances are he’s not managing this one on his own. So who could be helping him?

One theory suggests Kim’s former henchman, Al Chapman, could be on Jamie’s side.

I knew it. Jamie’s alive (and being helped by Al by the looks of things). #Emmerdale

Another has suggested Joe and Jamie have teamed up – and even that Graham Foster is still alive and helping too!

Joe and Jamie teaming up (and possibly graham) #emmerdale

Fans yesterday were convinced Kim knew everything and had helped him to get away from Gabby.

Emmerdale: Why has Jamie faked his death?

The possible reasons behind Jamie’s stunt are endless.

He’d had enough of his mum and had even tried to poison her recently. He was trapped by pregnant Gabby, who he didn’t love, and the woman he did love, Dawn Taylor, wanted nothing to do with him.

Getting out of the Dales with no hope of anyone finding him, might have seemed like the only way out.

But he underestimated his mother, who was always going to discover he was still alive and where he was hiding.

Will he return now she knows the truth?

Or is all this an elaborate hoax? Is Jamie actually dead and someone else is messing with Kim? Could Joe Tate be behind this after all?

What do you think of this latest Emmerdale twist? Leave us a comment on our Facebook page @EntertainmentDailyFix and let us know what you think!