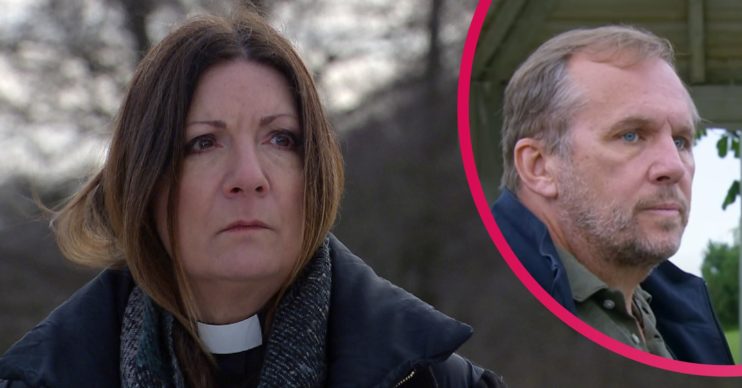 Emmerdale: Harriet hiding in the cellar has confused fans all asking the same question

Harriet has been staying in her cellar

Emmerdale fans all have the same question about Harriet as she is keeping herself hidden in her cellar.

Over the last few months, Harriet has been struggling with guilt over the murder of DI Malone.

This week, Harriet was brought home by PC Swirling, who told Will she had been ranting about a body.

But Will covered saying she was on about the exhumation at the graveyard.

Later, Harriet asked Will to punish her. Unsure what to do, Harriet self-exiled herself to her cellar with her bible to pray for forgiveness.

Meanwhile, Will has told family and friends that Harriet is away on a church retreat.

However fans are all asking the same question about Harriet – How is she going to the toilet?

If Harriet is staying in the cellar, where is she going to go to the bog (toilet) In a bottle? In a bucket? In the corner ? #emmerdale and is she going to stay in the same clothes?

Is there a toilet 🚽 in that cellar 🤔 #emmerdale #harriet

How does Harriet go to the loo? Has she got a bucket or something? #emmerdale

Where does Harriet do the toilet ? A bucket ? #emmerdale

So is Harriet sneaking up to the toilet when no ones around? 🤣 #emmerdale

Emmerdale: How long will Harriet be in the cellar?

It looks like Harriet will be staying in the cellar for some time.

In next week’s scenes she is still in self-imposed exile. Will pays her a visit in the cellar and sees she’s packed up her belongings and hopes she will leave her bunker soon.

But Harriet is unsure, reluctant to commit.

Will sneaks back upstairs and pretends to enter from the back door. He lies to Kim telling her that Harriet wanted him back then took off when he rejected her.

Soon Kim makes a pass at Will which he prepares to reject. But when they hear a noise in the cellar, Will suggests the go upstairs. Kim’s excited while Will steals himself.

Afterwards, Will heads back downstairs with Kim, still painfully aware of Harriet in the cellar.

When a satisfied Kim suggests they meet at her place next time, he is stricken to realise that she’s expecting a repeat performance.

After Kim leaves, Will heads down the cellar to check on Harriet. He defends his actions with Kim as a necessary distraction.

But will this make a heartbroken Harriet regress?