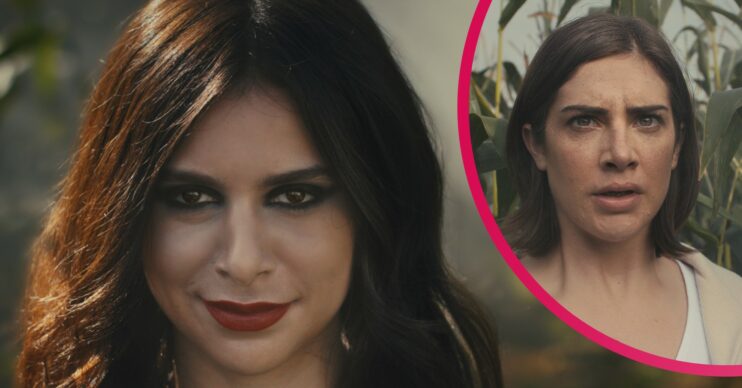 Murderous Meena is on the hunt

Emmerdale has teased Meena will murder again with David, Victoria, Mack, Charity and Andrea in the firing line.

A new promo has been released showing what we can expect from the huge week later this month and it looks good!

Tipped as one of the most gripping and thrilling weeks in Emmerdale history, the week will feature multiple stunts, and if the promo is anything to go by, there’s the possibility of more than one death.

Who does Meena kill in Emmerdale?

Murderous Meena Julta is at the heart of the action as her jealousy over Victoria and David reaches a dramatic climax.

The trailer, set in a maze, sees more than one character running scared, as malicious Meena stands in the centre wearing a hooded cloak.

Victoria Sugden and David Metcalfe are seen running through the maze screaming for each other. However, with Meena determined to keep them apart, has she resolved to kill Vic to get her man?

Or is she going to kill David to ensure no one can have him?

Is Manpreet a murderer too?

Also seen running through the maze in terror is Andrea Tate, desperately trying to be reunited with her boyfriend Charles.

But Manpreet is there too. She has a past with Charles – does she want him back?

Could Manpreet be a murderer as well as her sister? Or is Meena out to get Andrea so Manpreet can have her man back?

Or is it someone else after Andrea: Jamie Tate returned from the dead, perhaps to off his ex and take custody of their daughter?

How is Charity Dingle involved in Emmerdale survival week?

Charity and Mack are in the maze seemingly trying to get some private time away from prying eyes. But as soon as they start passionately kissing, they hear screaming.

Will they witness the murder? Or will one of them be killed by mistake instead?

Might Charity be the one to expose Meena in Emmerdale? Or could Meena murder her too to keep her secret?

Read more: Emmerdale: Who is Joe Tate and where is he now?

Who dies in Emmerdale survival week as Meena kills again?

Show producer Kate Brooks has revealed: “This is Emmerdale at its most ambitious as we take viewers on an exhilarating journey through a series of showstopping stunts.

“As the twists and turns come thick and fast, viewers will be left on the edge of their seats, and with Meena at the heart of the story it means only one thing; not all our villagers will survive.

“Daring and audacious; this is Emmerdale like you’ve never seen before.”

Will Victoria and David live to find their happy ever after?

Is Andrea in danger too? And will Charity survive to tell the tale?