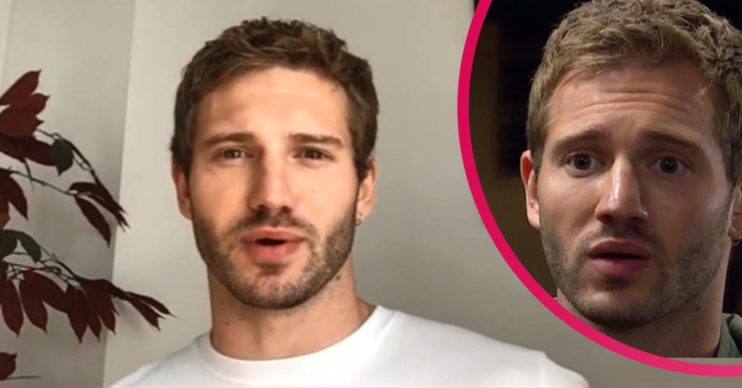 He got a slap on the wrists

Emmerdale star Alexander Lincoln appeared on Lorraine today to talk about the latest developments in the Jamie Tate storyline.

But he admitted he was fearful he’d be given a ‘slap on the wrists’ on his first day back at work over his new haircut.

During lockdown Emmerdale star Alexander took advantage of not being at work and having to think about continuity, so shaved his head.

He shared the pictures of his new hair do on Instagram. He also grew a big moustache.

But while the tache was easily sorted out, hair growing back takes a bit longer!

While Lorraine was chatting to him about all the changes now Emmerdale and the other soaps have returned to work, she said: “Now look, your hair’s grown back because you had it all shaved off didn’t you?”

“I did,” Alexander admitted. “Me and my housemate thought it was the end of the world and with that we wanted to get our Mad Max look on so shaved our heads and I grew a little goatee.

“But thankfully it all grew back. I was a little bit scared I was going to get a slap on the wrists!”

Lorraine quipped: “Thankfully, you’re such a virile young man it all came back!”

“Well I don’t know, it’s starting to thin at the front,” Alexander joked before Lorraine assured him: “It looks great!”

Although his hair didn’t cause trouble, his tan was noticed by viewers when the soap’s first post-lockdown scenes were aired.

Jamie was seen in one scene looking somewhat pasty after the British winter, but Alexander’s sunbathing while he wasn’t at work meant the next scene saw him looking incredibly brown!

Fans soon picked up on it and joked: “Jamie got a nice tan considering it’s supposed to be March!”

What is happening with Jamie Tate in Emmerdale?

Jamie is stuck in a love triangle with wife Andrea and Belle Dingle. He wants to be with Belle, but things have taken a turn. Jamie knocked Moira down in a hit and run and Andrea covered his tracks, leaving him indebted to her.

In fact, Andrea is using her knowledge to force Jamie to stay with her even though he was planning to leave her for Belle.

Alexander revealed he gets ‘frustrated’ with his character sometimes!

“He’s just going along with the flow. He doesn’t really take action that well and he is manipulated and it can be quite frustrating.”