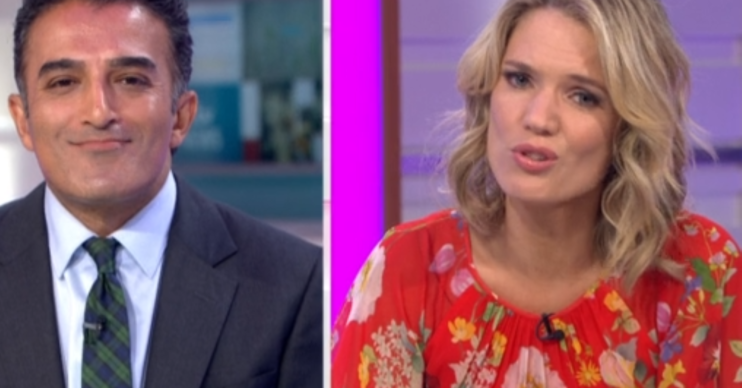 What was the point of having her on?

Good Morning Britain welcomed Noah Cyrus on to the show today, but gave her mere minutes of air time before cutting her off.

The show ran out of time, and as Noah was chatting away via video-link about her new album, Adil Ray and Charlotte Hawkins had to interrupt and tell her they were out of time.

Noah, the daughter of Billy-Ray Cyrus and sister of Miley, had stayed up until midnight her time to do the Good Morning Britain interview.

But GMB viewers joked she shouldn’t have bothered given the little time they gave her.

Rushing through a Dr Hilary segment host Charlotte, who was today joined by Adil, said they had a special guest joining them for the end of the show.

It was clear she was rushing her words as time was ticking. However they linked up with Noah and told her: “We haven’t got much time left, so we’re going to pack it in.”

Noah spoke about her new album, saying: “It’s definitely been an emotional journey writing the new EP, just because I went through so much because a lot of the songs started in 2018.

“I started writing very truthfully about broken relationships, about broken hearts, I let so much out of me.”

What’s the point of interviewing someone for three minutes especially when she stayed up so late?

She continued: “My dad is a very spiritual person and it made me think about the world and how we’re not taking care of it, we’re not taking care of each other, and there’s so much hate in the world and we need so much love. I think about the love I have for my family and all of that how this is all going to end all of our fears, all of our love all of that comes to an end, it’s like a bittersweet…”

Charlotte added: “I’m so sorry, we’ve got to leave it there. Thank you so much for joining us, we look forward to the EP.”

They didn’t even give her a chance to say goodbye back.

Those watching at home weren’t happy they gave her such little air time, calling it a new record for the show. They also said it felt awkward.

#gmb seriously need to improve the timings for interviews. I’ve noticed that almost all of the final guests on the show get hardly any air time. Felt sorry for #NoahCyrus like I do for many other guests who get cut off after two minutes

#GMB well that was super awkward between Noah Cyrus getting rushed through her interview yet she wanted to tell us all about her life. Theres a guest you wont get again #gmb

I hope Noah Cyrus writes a song about how #gmb #goodmorningbritain just cut her off! Poor girl

Why the hell would interview noah Cyrus for 17seconds, she was saying something really interesting before u cut her off @GMB next time just leave it #gmb

Noah cyrus that was ackward #GMB

#GMB Noah got 45 seconds of air time… a new record?

Good Morning Britain continues weekdays at 6am on ITV.