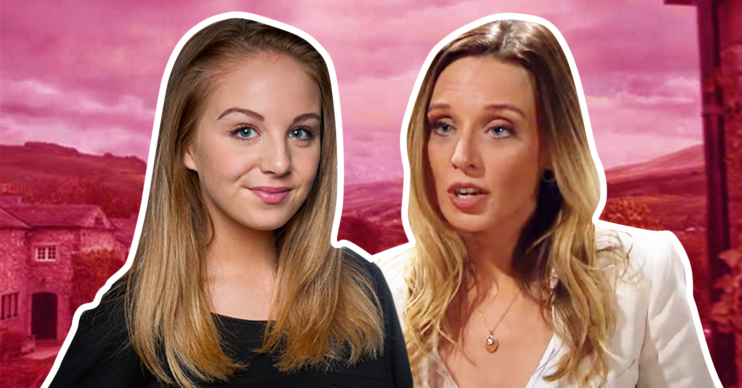 Belle has struggled with her mental health in the past

Emmerdale fans were left disgusted as ‘pathetic’ Andrea Tate used Belle’s mental health to try and deter Jamie from being with her.

Currently Andrea and Jamie are hiding the fact he ran over Moira and left her. However Andrea is using this information to blackmail her husband into staying with her, after his affair with Belle.

In last night’s episode (Wednesday, July 15) Andrea told Jamie they needed to show a united front and together they went to the cafe.

In the cafe, Andrea tried to make out to Belle like she and Jamie were back together.

Later, back at Home Farm, Andrea desperately pleaded with her husband for them to try again, forgiving him for his affair.

As Jamie told Andrea he no longer loved her, she begged for another six months to make their relationship work. But as it became clear Jamie wasn’t interested, she began to use Belle’s mental health to try and put him off.

When Jamie asked what Andrea meant, she said: “Mental health stuff. She needs someone who will look after her. I mean burden her with your stuff and who knows it may be enough to tip her over the edge.

“I don’t want to see Belle go back into a secure unit and I’m sure you don’t.”

Jamie told his wife that it was a low blow and fans agreed, saying it was wrong for Andrea to use someone’s mental health against them.

Andrea playing the ‘Belle is a nutter’ card again. #Emmerdale

As Emmerdale fans know, Belle has struggled with her mental health in the past.

After the death of her friend Gemma, Belle was diagnosed with schizophrenia and was sectioned and treated.

Since beginning her relationship with Jamie, she has been open about her struggles.

As Jamie continued to reject Andrea, she threatened to go to the police if he left her.

And next week her blackmail continues when she lets slip to Kim that it was Jamie who ran over Moira.

But when Kim insists they clean up the evidence, Andrea tells her that she and Jamie will have to do things her way from now on.