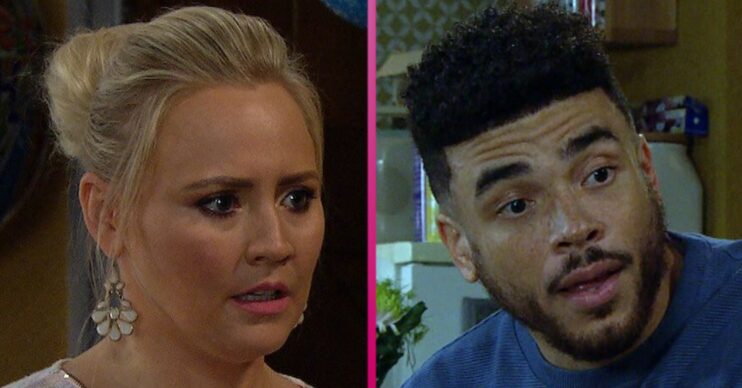 Amy Walsh is going on maternity leave soon so happy ever after doesn't seem likely...

Emmerdale spoilers for next week reveal Tracy Metcalfe and Nate Robinson set a date for their wedding.

But it could be all about to come crashing down around them when Nate finds his world turned upside down. Will they make it through this latest bombshell?

Read more: Emmerdale spoilers: Vinny in danger as he closes in on Meena?

Loved-up and happy after a bumpy road of late, Tracy and Nate decide to set a date for their wedding.

It should be a joyous decision full of exciting planning and fun times. However, for Nate that’s soon not the case…

The farmer has his world turned upside down. But what – or who – by? And could this threaten his future with Tracy?

He’s already struggling with his guilt over cheating on Tracy, but as the week goes on, he’s living on his last nerve.

Will he be forced to come clean? Or is this latest bombshell about something totally different?

Who did Nate sleep with in Emmerdale?

Viewers know Nate has cheated on Tracy. Although he strenuously denied it, it soon became clear he had in fact done the dirty.

He was on a night out while Tracy waited at home with their daughter and he ended up getting totally hammered and smashing his phone.

After spending the night at a mystery woman’s house, he insisted he had only slept on the sofa. Tracy still couldn’t forgive him, but has recently come round and the pair seem to be back on track.

However, when Fiona turned up in the village to return something he had left on her bedside table, it was revealed Nate had slept with her.

He told her to leave and never come near him again – but is she back? Is that what is threatening to destroy Nate’s little family unit?

Read more: Emmerdale must get Meena’s ending right – here’s how

When is Tracy leaving Emmerdale?

Her maternity leave means Tracy will be off our screens once again soon – and so it looks like whatever happens, there’s no happy ever after for her and Nate.

In a recent interview with OK! magazine, Amy admitted she was hoping the new arrival would come a bit before the big day itself.

“My grandma was born on Christmas Day and she hated it,” she revealed.

“I’d like the baby to come the week before Christmas as it will be so magical for all the kids. The thought of potentially being there with a baby in my arms is amazing.”

The actress also said she was going on maternity leave “very soon” – and she is more than ready!

“I’m ready for it. It’s quite hard physically and mentally trying to get my head round everything and I’m tired.

“Also trying to hide the bump was getting so ridiculous!”

Will Tracy leave alone? Or will Nate go with her if they can patch things up again?