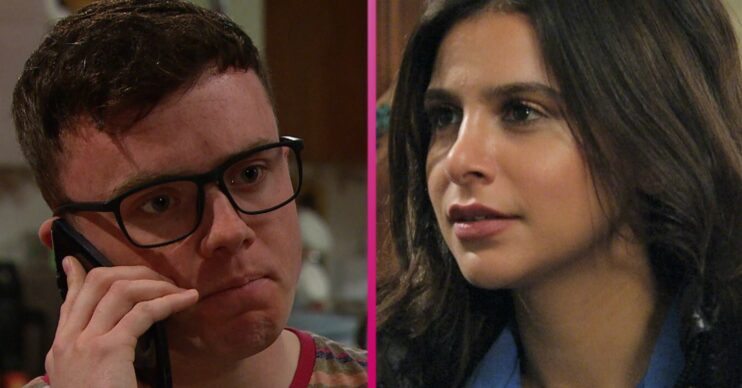 Emmerdale spoilers: Vinny closes in on Meena as he hunts for vital evidence

He's desperate to free Liv, but could he discover the sinister truth?

Emmerdale spoilers for next week have revealed Vinny Dingle could be in danger as he closes in on the truth about Meena Jutla.

Vinny is determined to prove Liv Flaherty is innocent of killing Ben Tucker, but so far he’s hit a brick wall in his hunt for clues.

However, next week he gets information from Billy that could lead him straight to Meena’s door. But will this put Vinny in danger?

He then reveals there was footage from the body cam that Ben believed proved his theory.

Clever Vinny instantly realises the footage could be the key to proving Liv’s innocence and begins to search for it.

But he has no idea that if he does find it, he could be putting himself in the firing line…

Who has the body cam footage?

Ben found the camera moments before his death last month. On it, he saw someone trying to drown Victoria Sugden, but couldn’t quite make out who it was.

He was then confronted by Meena and she made it clear who she was and what she was capable of.

As Ben tried to run, Meena slipped on some wine spilled by Liv earlier in the day. But while Ben believed she was dead, she was actually very much alive and came back to murder him.

She whacked him over the head with an oar and watched him die.

Liv, who argued with Ben before and was captured doing so on a video on Ben’s mobile phone, is now in prison for his murder.

And as she can’t remember what actually happened that night because she was so drunk, the evidence really is stacked against her.

As far as we know, Meena took the body-cam footage with her, but what if there’s a back up somewhere Vinny could find?

Or could he discover Meena has it some way or other?

The signs are all there that Vinny will find out the truth – but will he bring Meena down? Or will he become her next victim in her quest to keep all her killer secrets?

Emmerdale fans are convinced Vinny is the key

Fans are convinced that Vinny is the key to her take down.

However, some also fear that if Vinny does find the footage, he will be killed.

Now that I hope to See

Meena’s got to get her comeuppance sooner rather than later – but will it be Vinny who brings exposes her?

And will Liv get the freedom she deserves?