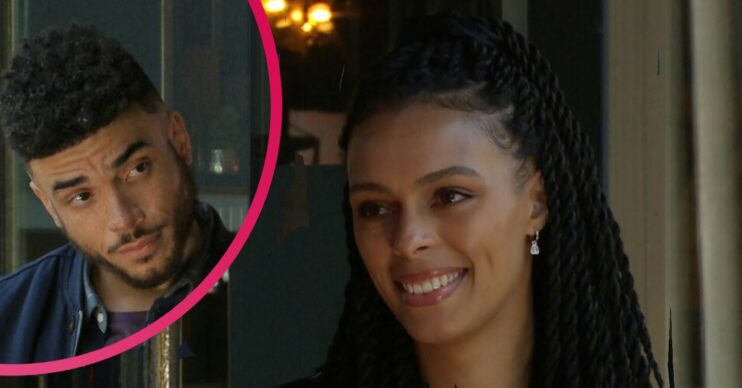 Who plays Fiona in Emmerdale? Yemisi Oyinloye has been in Coronation Street and Doctors

The actress who plays Fiona may look familiar

Emmerdale fans may remember Nate Robinson met up with a woman named Fiona, but what do we know about her and the actress?

On Thursday, November 11, Nate will begin flirting with a lady called Fiona and he ended up going back to hers.

The next day, his fiancée Tracy Metcalfe was not happy to find out Nate spent the night at another woman’s house.

Although he claimed nothing happened, viewers know Nate and Fiona did sleep together.

But where do we know actress Yemisi Oyinloye from?

Read more: Emmerdale fans beg for Vanessa and Charity to get back together as Vanessa returns

What happened between Fiona and Nate in Emmerdale?

Last month viewers saw Nate and Billy head into Hotten for a night out.

When Nate was cornered by an attractive lady, he had no idea Tracy is trying to get hold of him.

She set up a romantic evening for them and when she found out he went out on the lash with Billy, Trace sent him a sexy snap to entice him back home.

Unfortunately, however, Nate smashed his phone and didn’t see what Tracy sent.

Later Fiona found Nate again and offered for him to come back to hers to call a taxi home.

However he went back with her and they slept together.

When Tracy found out Nate spent the night at another woman’s house, she wasn’t happy.

But when he claimed nothing happened, she forgave him.

A few weeks ago, it was revealed to viewers that Nate did sleep with Fiona when she came to the village to return his watch.

Who plays Fiona in Emmerdale?

Fiona is played by Yemisi Oyinloye.

Yemisi is 27 years old and from Warrington, Cheshire. She started out starring in school plays, before making her professional debut at Leeds Playhouse.

She has appeared in shows in London and at the Edinburgh Fringe.

What else has Yemisi Oyinloye been in?

Yemisi has actually had a part in Emmerdale before!

She played a receptionist at the Abbott Lane Surgery for three episodes back in July 2018.

She has also played a receptionist in Coronation Street in 2016, and has appeared in Doctors and Casualty.

Other roles include dramas Safe and The Five, but she is perhaps best known for playing DC Sally Reed in Sarah Parish-led drama Bancroft. She also starred as Amber in Cold Feet in 2020.