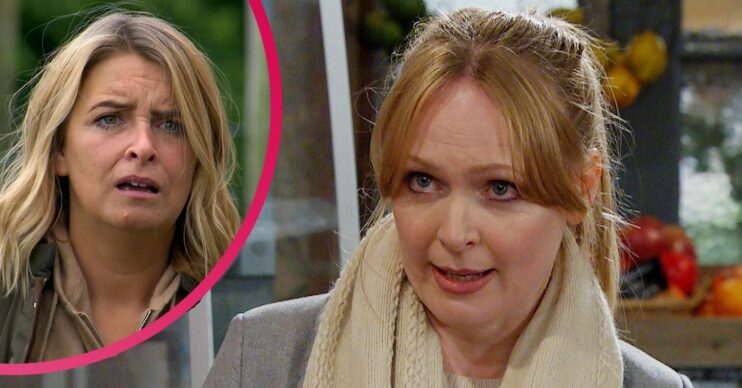 Emmerdale fans have begged for Vanessa and Charity to get back together as Vanessa returned to the village after more than a year away.

Last year Vanessa, who was going through chemotherapy, left the village to look after her unwell mother.

She planned to return to the village after she had been given the all-clear on her cancer. But Vanessa discovered Charity cheated on her with Mackenzie and decided to stay away.

However Charity was shocked to see Vanessa back in Emmerdale in last night’s episode (Wednesday, December 29).

Vanessa was shocked to see Charity confessing her love to Mack, but fans are already saying they want Vanessa and Charity back together.

Hope charity and Vanessa get back together #Emmerdale

What brings Vanessa back to Emmerdale?

Vanessa returned to Emmerdale to see her sister Tracy and her niece Frankie.

Hope Charity and Vanessa get back together.

She revealed she would only be returning for a few days. However next week she announces she is coming back for good.

Meanwhile Cain is angry when Nate reveals Tracy kicked him out for cheating and refuses to let him stay with him.

As Cain’s rage comes close to boiling over, distraught Nate returns to Tug Ghyll in an attempt to pick up his stuff and see his daughter but Vanessa turns him away.

The next day Tracy is hurt that Nate hasn’t tried to see Frankie. Vanessa comforts her, uneasily hiding Nate’s attempted visit the day before.

However Vanessa is busted when a mortified Tracy overhears her telling Charity she stopped Nate from seeing Tracy. How will Tracy react?