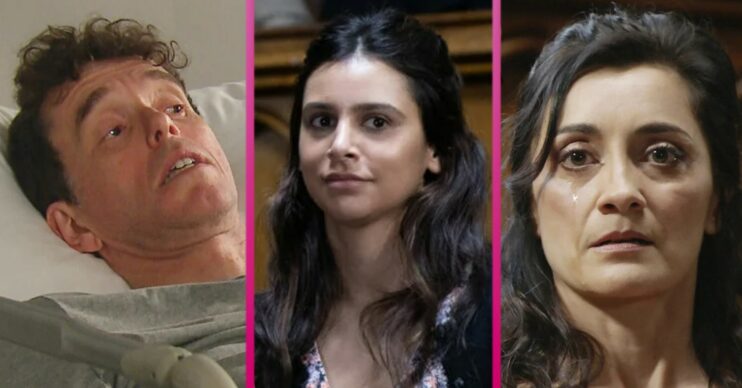 12 Emmerdale spoilers including Meena’s trial, a health breakthrough and a new partnership

Meena's courtroom antics have the whole village on edge this week

Emmerdale spoilers for next week reveal tense scenes as the trial of the century gets underway. More than one resident will be left shattered as the drama in court plays out. But will Meena win her freedom?

Meanwhile, Marlon has a breakthrough and Belle finds herself a new partner – on her terms!

All this and more in next week’s Emmerdale spoilers

The day of the trial arrives, and all involved are feeling anxious over what will happen.

Well, apart from Meena that is. As always, she’s looking forward to being the centre of attention as she enters the courtroom.

However, rather than revel in it, Meena puts on a meek and mild act. As the trial gets underway, what is her plan?

Liam takes the stand, and his emotional testimony over Leanna’s death appears to win the jury over.

However, he’s in for a shock when the defence launch into their questioning and accuse him of having taken advantage of Meena by having an affair with her!

Eventually, it all becomes too much for Liam and he lashes out at Meena in the courtroom. Has he only helped Meena’s cause with his furious outburst?

Manpreet is dreading facing her sister in court, following the mind games she has recently subjected her to.

As she takes the stand, she stays resolute. But the defence begin to dig up her past, painting Manpreet as a serial liar and undermining her testimony.

Meena is lapping up the spectacle of her sister under fire. But can Manpreet keep her cool?

Meena continues to flirt with prison officer Ian Beeker, who has already bent the rules for her.

Last time she wanted a chocolate bar, then a newspaper, but whatever she’s after now is clearly a bigger deal.

Ian finds himself conflicted by Meena’s behaviour, but will he give in? And what might she want if he does?

Meena is advised not to take the stand, but there is no way she is going to miss her chance of the spotlight.

She spends the night before preparing for her big moment.

In the court, she plays it meek and mild, painting herself as the victim in all this. It’s quite a performance. And it seems the jury are lapping it up.

6. An anxious wait for the verdict

It’s a tense time as those involved wait for the verdict to be delivered.

After Meena’s performance, will the jury be convinced that she’s as innocent as she says?

Whatever happens, the next day the shocking events are front page news…

It’s Rhona’s birthday and April wants to throw her a party as a treat.

She arranges a surprise at the Woolpack, and while Rhona’s delighted, she feels guilty as she was due to visit Marlon.

Chas agrees to go to the hospital instead. However, Rhona still feels bad. Later, she decides she still wants to visit Marlon, but is torn when April begs to come along.

April is delighted when Rhona gets Marlon to agree to see her.

Marlon feels awkward about it, but April soon relaxes him with a joke.

Rhona is proud of how well April deals with the situation, realising just how mature the little girl is.

Marlon has a breakthrough at the hospital when nurse Gail uses some tough love.

Her efforts work, and he is delighted when he manages to form a complete sentence for the first time since his stroke.

Meanwhile, Paddy has a plan to raise Marlon’s spirits.

Rhona sets her sights on getting Marlon home, but Mary doesn’t agree.

Her mum thinks she’s expecting too much, too soon, but Rhona is determined.

While Mary frets, it’s clear that Rhona is exhausted. But she soon reveals a plan to make her dream come true.

Belle starts her meditation teacher training, hoping this is the start of a new career for her.

Al apologises for previously stealing Belle’s ideas and the pair discuss a partnership.

However, Belle won’t be taken for a fool again, and firmly establishes some ground rules between them.

Read more: Are Married at First Sight’s Olivia and Jackson still together?

Wendy wonders about Leyla’s whereabouts on the trial verdict day.

She’s quizzes Leyla on where she was. Will Leyla reveal that she is hiding something?