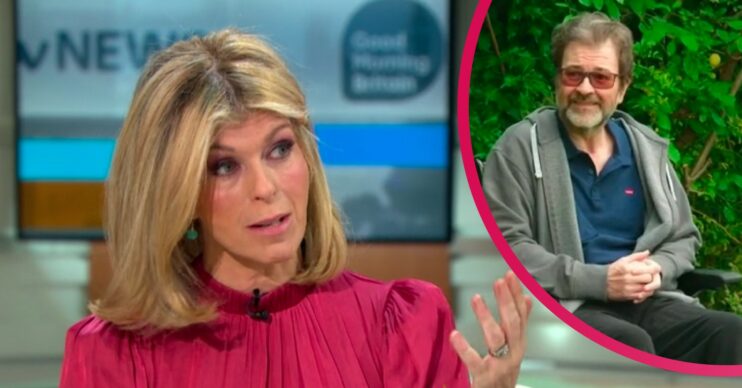 Kate's husband Derek has had a tough couple of years

Kate Garraway has issued a sad update about her husband Derek Draper, who is still suffering from the debilitating effects of Covid.

During yesterday’s edition of GMB, Kate and her co-host Richard Madeley welcomed former actor Chris Ellison onto the show.

Chris, who is best known for his role on The Bill, suffered a stroke in 2020. He was then diagnoses with aphasia.

Read more: The Split fans rage at BBC over infuriating motor neurone disease spoiler at end of episode one

Aphasia is a condition that leaves a person unable to comprehend or formulate languages. The condition develops when certain areas of the brain are damaged.

Chris was joined by his wife, Anita, during the interview. Together, they explained the devastating effects of the condition.

During the interview, Anita spoke about how difficult it is for Chris to communicate and understand people.

This was something that Kate could empathise with. Derek has trouble communicating following his battle with Covid.

“In a sense, Derek – because of Covid – has a version of this where he can understand, sometimes do odd words, but can’t express himself,” she said.

“It’s very interesting what you say Anita about the loneliness of that because you’ve lost that relationship and that ability for others to see your partner.”

Kate has previously spoken about the loneliness of Derek’s condition. “I can sort of see him, but he’s absent – and you just feel very much on your own, all the time,” she said.

The 54-year-old’s comments come just a week after it was reported that she had to make a tough decision on her husband’s behalf.

Kate reportedly had to make the decision to close down her husband’s company recently. Derek’s company had allegedly racked up over £200k in debts.

Derek set up Astra Aspera LTD, a psychotherapy company, back in 2011.

While he was ill with the virus, Kate became director of the company. However, it seems her efforts to keep the company going were ultimately in vain.

“It’s terribly sad, but Derek can’t work and has no prospect of being able to do so in the near future, so Kate thought it best to close it down,” a source told the Daily Mail.