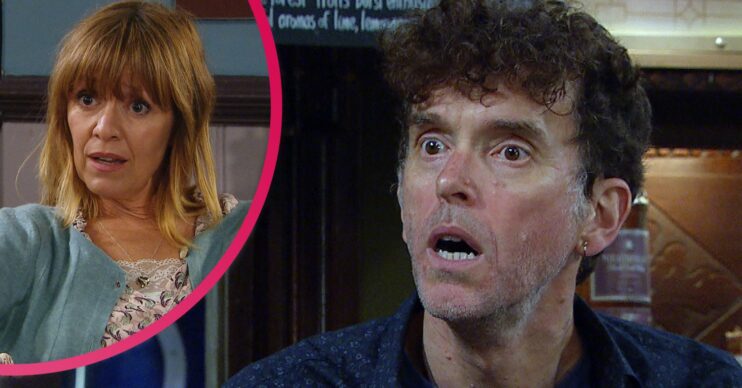 Marlon Dingle in Emmerdale: Who is the real love of his life? (Sorry Rhona!)

How many times has he been married?

Marlon Dingle in Emmerdale is a chef, a devoted dad, and a surprising hit with the ladies.

As he proposes to Rhona on Wednesday, November 3, if they make it down the aisle, it’ll mark Marlon’s fifth marriage. He’s clearly trying to rival Bob Hope for the most married man in soap crown!

But how many times has Marlon been married and who’s the real love of his life?

Fan fave Marlon’s been in the village for so long now we can barely remember a time when Emmerdale existed without him!

He arrived with dad Albert – Zak Dingle’s brother – in a red sports car. Marlon started working in various jobs, even working with Frank Tate for a while.

But when he got a job working with Kathy Glover at her wine bar and tea room he found his calling in the culinary world.

To begin with, Marlon Dingle in Emmerdale was a typical family member, getting into scrapes and committing petty crimes.

But in fact, when one of his schemes went wrong and led to him and cousin Sam being beaten up, he was cast out of the Dingle clan. It took a few years for him to be welcomed back into the family.

When Kathy hired chef Carlos Diaz to take over cooking at the tea rooms, Marlon should have been upset. But actually he’d already started working regularly at the Woolpack (and had even shared a sneaky snog with landlady Bernice Blackstock!) which was where he met his first wife, Tricia Stokes.

Marlon fell hard for cheeky, kind-hearted, funny Tricia and the cute pair seemed made for each other.

Their romance had some bumps along the way, though, thanks to Tricia agreeing to marry her friend Jason Kirk’s Aussie boyfriend Joe Fisher, so he could stay in the country.

Read more: Who is Tricia Dingle in Emmerdale? How did Marlon’s first wife die?

Marlon wasn’t keen on the fake marriage and the pair split for a while. When they were apart, Marlon dated vet Rhona Goskirk, but soon he and Tricia were back together.

Marlon and Tricia wed in a surprise ceremony on Valentine’s Day – awww – and for a while they were happy. But when Tricia went off to star in a Bollywood film, Marlon had an ill-advised one-night stand with cousin Charity Dingle.

When Tricia found out she was heartbroken and planned to leave the village on New Year’s Eve 2004. But Marlon wrote her a sweet list of all the things he loved about her and she changed her mind.

Just as she was coming back into the pub to tell her husband the good news, though, tragedy struck. In a huge storm, the Woolpack chimney collapsed and Tricia was killed. Marlon was heartbroken.

As Marlon grieved for Tricia, he grew close to Donna Windsor and they eventually started a relationship. At first they took things slowly because Donna was young and Marlon still bruised from losing Tricia.

And their romance hit another obstacle when Donna declared she was planning to join the police, much to the disgust of the Dingle family!

But the pair tied the knot and Marlon and Donna got through some hard times as a couple. They cared for Marlon’s cousin Lilith’s children for a while and even hoped to adopt them, though that didn’t work out.

And they survived the arrival of Marlon’s dodgy brother, Eli. He got Marlon into some scrapes, including kidnap. But Donna stuck by her man.

They also coped when Donna’s mum Viv was arrested for fraud, and when Donna was in a car accident that left her unable to walk for a while.

Eventually, though, Donna got involved with her partner PC Ross Kirk – Paddy’s cousin. They had an affair and Marlon and Donna split. For a while it looked like they might get back together, but then Donna caught Marlon drunkenly snogging his cousin, Chastity (seriously, Marlon, stay away from your cousins!) and said goodbye.

In 2014, Donna returned to the village with her daughter, April, and told Marlon the shocking news that not only was April his daughter, but Donna was dying.

Marlon and Rhona – first, second and third time round!

By the time April arrived in the village, Marlon was already a father to Leo, his son with Rhona Goskirk. He and Rhona had started a romance in 2001 before she left months later.

They rekindled it in 2002, with her departing again later that year, and tried for a third time when she returned for good in 2010.

Their romance didn’t last, though, and Rhona instead got together with Marlon’s best mate, Paddy. Rhona discovered she was expecting and the three of them co-parented Leo happily.

It wasn’t plain sailing, though, when Rhona and Paddy decided to move to New Zealand and take Leo with them. Marlon was determined to make them stay – and he got his wish when Paddy was arrested for assaulting a police officer and had his vet licence suspended, forcing them to stay in the Dales.

Marlon fell in love with Laurel Thomas but she was married to vicar Ashley and though she wanted to be with Marlon, she couldn’t cheat.

Eventually, though, after discovering Ashley was abusing his elderly father, Laurel broke off her marriage and she and Marlon became a couple.

Marlon and Laurel got married but Laurel’s struggles with alcoholism, just as Marlon was getting to know little April, proved too much for the couple and they split.

Marlon had a relationship with Carly Hope – Donna’s stepsister – for a while, but was heartbroken once more when Carly left the village with her handsome ex-boyfriend Matt.

For a while, Marlon was single but he was soon starting a romance with Leo’s headteacher Jessie Grant. It wasn’t an easy start, with Jessie struggling to get over her last relationship. But eventually she committed to Marlon and the pair wed in a cute surprise Christmas ceremony.

But Jessie’s sons Ellis and Billy, as well as the reappearance of her ex Al Chapman, all caused friction with her and Marlon and she left for a job in Dubai.

When Graham Foster was brutally murdered, it was Marlon who took the rap initially. Marlon hated Graham because he was dating Rhona and they planned to move away with little Leo.

Though Marlon did threaten Graham on the day he died, he wasn’t the killer. But that didn’t stop him being arrested and denied bail.

With Marlon behind bars, the Dingle family started the Free Marlon campaign, and Rhona worked hard to find the real killer.

Eventually, Rhona confronted her ex, Pierce, who was the murderer, and managed to stream his confession to the Free Marlon web page. Marlon was freed, but then suffered a small heart attack, making him realise life was for living.

Marlon and Rhona decided to give things another go earlier this year.

It’s been a rocky road as Rhona has faced prison over an assault charge against Brenda Walker. Although the CPS have decided to take no further action, the ordeal has made Marlon realise what’s right in front of him.

When he pops the question to Rhona initially, it’s an impromptu proposal. Rhona thinks he’s joking and laughs it off, but he’s hurt.

Devastated Marlon is once again given hope on Thursday, November 4, but will he manage to get a ring on Rhona’s finger? Will she say yes? And will Marlon’s fifth marriage be the everlasting love?

With four marriages under his belt and now happily loved up with Rhona it’s hard to pick which of Marlon’s romances was his true love.

But anyone who watched the episodes when Paddy went to pick Marlon up from prison could tell that Mr Dingle’s most enduring, most real and most heartfelt relationship is with his best mate, Paddy Kirk.

Their bromance warms our hearts and we’re sure it’s going to last forever. What do you reckon?