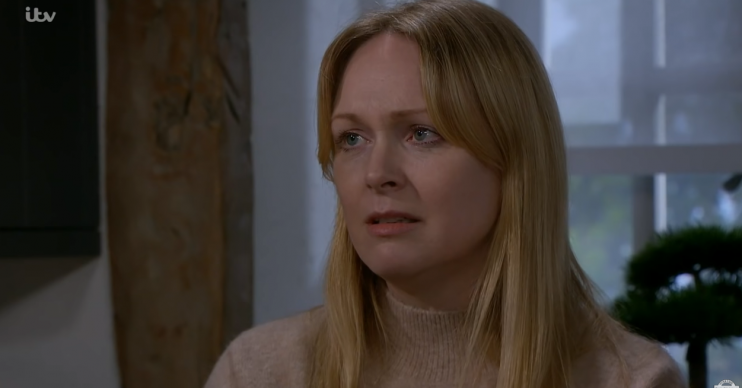 There's a rocky road ahead

Next week’s Emmerdale sees Vanessa Woodfield and Charity Dingle find their relationship under threat as the pressure of Vanessa’s cancer diagnosis takes its toll.

Vanity have been to hell and back recently, from Vanessa being taken hostage by evil Pierce Harris during his terrifying reign of terror over Rhona Goskirk, to the devastating news that Vanessa has stage three cancer.

But while Vanessa being held hostage by Pierce made Charity realise just how much her partner means to her, it seems Vanessa’s cancer battle might be about to push the pair to the limit.

Next week sees Vanessa in pain as she continues her fight against cancer, and Charity can’t help but feel useless as she tries to support her.

But things only get worse when Charity heads to Tracy Metcalfe’s house, only to realise with horror that she is throwing a surprise party for Vanessa’s birthday.

Knowing that a party is the last thing that Vanessa needs, especially as she is suffering from the side effects of the cancer that she still hasn’t told anyone about, Charity tries to talk Tracy out of the celebrations.

But Tracy is adamant they are going to cheer her sister up, not realising that she is secretly fighting for her life against bowel cancer.

Charity takes Tracy outside, away from the other party guests, and tries to talk some sense into her. But when Tracy fails to get the message, Charity is reluctantly forced to tell Tracy the truth about Vanessa’s condition.

Tracy is floored to hear her sister has cancer and hadn’t told her, and agrees to cancel the party immediately.

But before they can usher the guests out, Vanessa has walked in as everyone shouts ‘surprise’.

Vanessa tries to put on a brave face in front of a room full of people, but her front soon cracks when she realises that Charity has told Tracy her news.

A devastated Vanessa flees the party and races home, with Tracy close behind to check she is okay.

Eventually the sisters talk, but as Vanessa opens up to Tracy, Charity can’t help but feel sidelined by their closeness.

Believing she is being shut out, Charity vents her frustrations on Tracy and the pair come to blows.

Will they be able to put their argument to one side for the sake of Vanessa?

Do you think Vanessa will be able to keep the peace between Tracy and Charity? Leave us a comment on our Facebook page @EntertainmentDailyFix and let us know what you think!