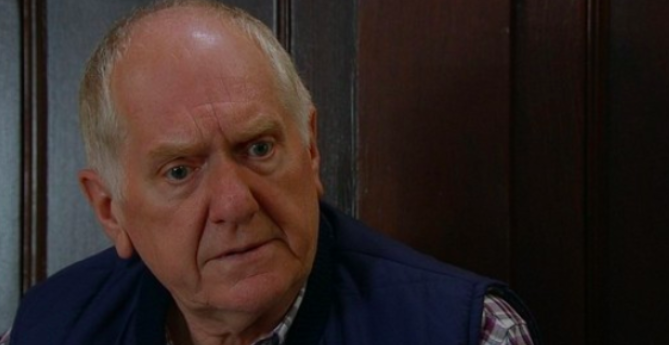 Is it really that easy?

Viewers of Emmerdale were left incredulous last night, when Doug Potts announced he was moving to Australia within days.

Those watching the episode on Wednesday (February 26) questioned whether the plot was realistic, believing Doug was too old to be able to move Down Under, and unconvinced he’d be able to make such a quick getaway.

Read more: Emmerdale fans ‘broken’ as Charity plans her future with Vanessa unaware she has cancer

Just a few days ago, the soap revealed that Duncan Preston – who has played Doug for 13 years – had quit the soap and his character’s final appearance would be shown this week.

Emmerdale really? Do your research. Doug can’t just emigrate to Australia unless he’s got huge amount of cash.

Emmerdale confirmed that Duncan is leaving the soap, and there are “no plans” for his return.

This week, he returned from Australia with daughter Laurel and her stepdaughter Gabby, son Arthur, and daughter Dotty.

However, after spending time in Australia, Doug returned and broke the news that he plans to move there for good.

But, as he explained to Laurel that he was moving into Sandy’s apartment and “taking a leap of faith”, viewers couldn’t believe he’d be allowed to move there and so quickly!

Well Betty did and sandy did so it must be true

Someone tell me how Doug is able to just upsticks and move to Australia.. he must be in 70's so how does he get a visa #emmerdale

That’s what I said!

How come Betty has sandy’s flat? Wouldn’t he have left it to grandchildren? When did Betty become rich enough to give apartments away and pay for all of them to go to oz?

So Doug at an age of 60+ is just going to up sticks & move to Australia. I’m not aware under their immigration policy it would be allowed #emmerdale

#emmerdale really??? Do your research. Doug cant just emigrate to Australia unless hes got huge amount of cash. Takes a year as well to try get a permanent Visa. Be realistic

One wrote: “Someone tell me how Doug is able to just up sticks and move to Australia?! He must be in his seventies, so how does he get a visa? #Emmerdale.”

A third dripped with sarcasm when they wrote: “Yeah, everyone knows you can just decide you want to live in Australia and you can go the next day as well, just like that, marvellous.”

“You can’t just move to Australia! He’s far too old… A visa would never be given to him,” insisted another, and one more said: “If only it was that easy, no visa, no PR if he was planning to live permanently oh and he must have hundreds of 000s of dollars behind him.”

Another fumed: “Emmerdale really? Do your research. Doug can’t just emigrate to Australia unless he’s got huge amount of cash. Takes a year as well to try get a permanent visa. Be realistic.”

However, one fan reminded everyone it’s just a TV show, saying: “Why can’t people realise this is a soap and when a person wants to leave they can and so need to be written out.”

Will you miss Doug Potts? Leave us a comment on our Facebook page @EntertainmentDailyFix and let us know what you think!