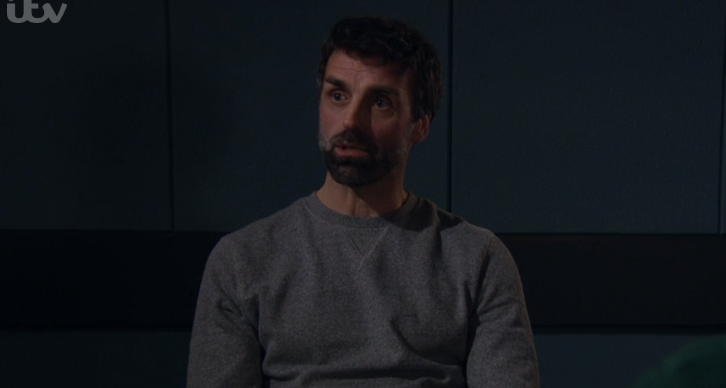 Fans of Emmerdale have been left fearing Pierce Harris won’t face justice as it was revealed he was once friends with Detective Inspector Dent.

DI Dent is one of the detectives trying to solve the murder of Graham Foster.

After Graham’s death, Marlon Dingle was framed for the crime by Pierce.

Pierce had killed Graham as revenge after Graham warned Pierce to keep away from Rhona Goskirk, the woman Pierce raped in 2017.

For the last week, unhinged Pierce has been keeping Vanessa and her son Johnny hostage in Laurel’s home, Mulberry cottage.

When Rhona found out what Pierce had done, she agreed to meet him but live streamed his confession to killing Graham to the Free Marlon page.

Pierce was arrested and taken to jail, however it appears he has some friends in high places.

After his interview, where he told detectives the confession was part of a role play with Rhona, Detective Sergeant Ward left the room, leaving Dent and Pierce to talk.

Pierce turned to her and said: “Alone at last. I was waiting for you to say something. How’s the family? Girls must’ve grown up a lot by now. Is Ava still crazy about horses?”

Dent told Pierce she couldn’t help him unless he gave her something to work with.

Well that’s it then, so much for justice.

Later, after DS Ward returned and they carried on the interview, Pierce said he wanted them to dismiss his confession as it was gained illegally.

Read More: Emmerdale fans ‘broken’ as Charity plans her future with Vanessa unaware she has cancer

However, DI Dent told him just because they went for work drinks with friends, didn’t mean there was a conflict of interest.

The detectives told Pierce his DNA was found on the torch and footprints were found at the crime scene of Graham’s death.

The new information led to Marlon’s release, however some viewers fear DI Dent will end up helping Pierce and he will avoid facing justice.

Omg Pierce knows the copper, well that’s it then so much for justice #Emmerdale

Wtf a corrupt cop ? What a load of rubbish this story is turning into…. What a joke… Pierce will get off no doubt #Emmerdale

If Pierce gets away with it because of that copper 😬 #Emmerdale

Not really sure Pierce can get away with this bent copper or not! The kidnap, confessing to murder, assault surely the CPS have enough to prosecute 🤔 #Emmerdale

FFS don't say the female cop will let Pierce escape, the story is so boring they're going to drag it on for months I stopped watching #Emmerdale while it was ongoing I'll stop again if it's not over

Do you think DI Dent will help Pierce, or will he go back to prison where he belongs?