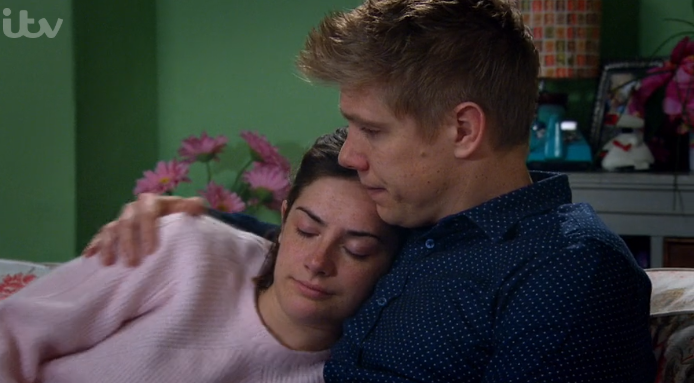 Ever since Victoria Sugden was brutally raped in distressing scenes earlier this month, Emmerdale fans have known it’s only a matter of time before her big bro Robert would seek some rough justice.

And that time is fast approaching.

Actor Ryan Hawley, who plays Robert, has been spotted filming on location and it’s clear his character is on a mission to expose rapist Lee Posner and bring him down.

Alongside his onscreen husband Aaron, portrayed by Danny Miller, Robert is seen visiting the car showroom where Lee works.

The dramatic scenes, which are set to air in June, will see Lee forced to suffer the consequences of his brutal sexual assault on Vic.

They are seen speaking to staff at the business and warning the local residents about what sort of a vile man Lee is.

In fact, they go one step further, and post incriminating posters of Lee around the place. Underneath Lee’s name and photograph are written the words ‘rapist’ in bold red letters.

While the scenes were filmed on a sunny day, the mood between the men is black as they seek to avenge Rob’s sister, who has discovered she is pregnant by her rapist.

Victoria was raped during the Big Night Out storyline, in which Maya and Jacob’s affair was exposed and Rhona cheated on Pete.

Lee walked Victoria home when she became separated from her mates, but wouldn’t take no for an answer at the end of the night.

Despite Victoria’s repeated attempts to get rid of him, she was horrifically raped in her own home.

She later confided in Moira about the assault and reported him to the police.

An Emmerdale spokesperson spoke of Robert’s plans for revenge with Inside Soap, saying: “Victoria was so traumatised after the assault that she couldn’t face a medical examination, and also disposed of the clothes and bed linen from the night in question.

“The idea that Lee might get away with what he did to her doesn’t bear thinking about for her or her family, and Robert isn’t just the sort of person who can just sit back and do nothing.”

Victoria and Robert are currently taking a break from the village and he has postponed his plans to have a baby via surrogate to concentrate on looking after his sister.

Reports suggest that Victoria may even give her baby to Robert and Aaron to adopt.

Do you think Robert should seek his own justice? Or leave it to the police? Leave us a comment on our Facebook page @EntertainmentDailyFix and let us know what you think!