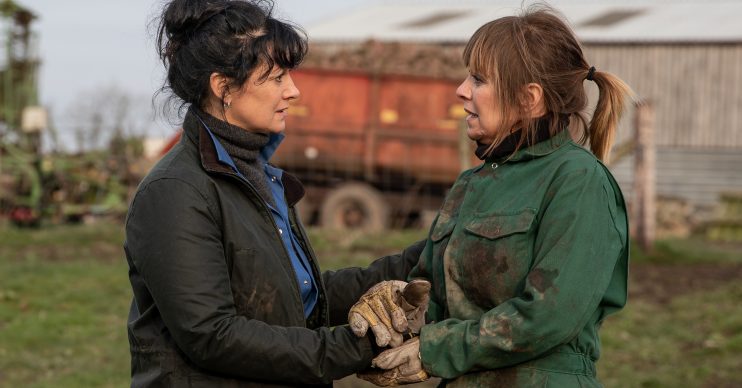 Moira and Rhona are now business partners, but could they be partners in love too?

Emmerdale fans are convinced a romantic relationship for Moira and Rhona was ‘revealed’ in last night’s episode (Wednesday, April 1) after the soap dropped a hint.

This week Emmerdale fans predicted a lesbian fling for Rhona and Moira after they both opened up about their problems.

While Rhona has been dealing with the loss of her boyfriend Graham Foster, Moira spoke about her current money worries.

However in last night’s episode (April 1) Rhona learned that Graham had left his money to her in his will, much to the dismay of his wife Kim Tate.

After overhearing Matty tell Cain that Moira was thinking of selling the farm to Kim, Rhona offered to invest in Butler’s farm and go into business with Moira.

The farmer said: “Oh, Rhona, I wanna kiss you right now!” before pulling her in for a hug.

Rhona responded by saying “I mean… why wouldn’t you?”

Fans think this is a hint that the two women will have a fling.

#Emmerdale Moira and Rhona will get stuck in to eachother soon

anyone else thinking rhona will be moira’s new love interest? 👀#Emmerdale

Could this be foreshadowing? Will Rhona and Moira become Emmerdale’s newest romance?

Moira and Rhona’s most recent relationships

Moira’s marriage to Cain Dingle broke down last year after he discovered she had been cheating on him with farmhand Nate – who turned out to be Cain’s long-lost son.

Rhona was left heartbroken in January when she found out Graham had been killed. It was later revealed her rapist ex-husband, Pierce Harris, was the one who murdered him.

How will Kim react to Moira and Rhona’s new business deal?

Kim wasn’t happy when she discovered Graham had left his money to Rhona and even blamed her for his death.

We can’t imagine she’ll be happy when she finds out Rhona is using Graham’s money to go into business with Moira.

Although Kim’s reaction hasn’t been confirmed, we know she doesn’t play fairly.

Could she even go as far to kill Rhona for getting in her way?