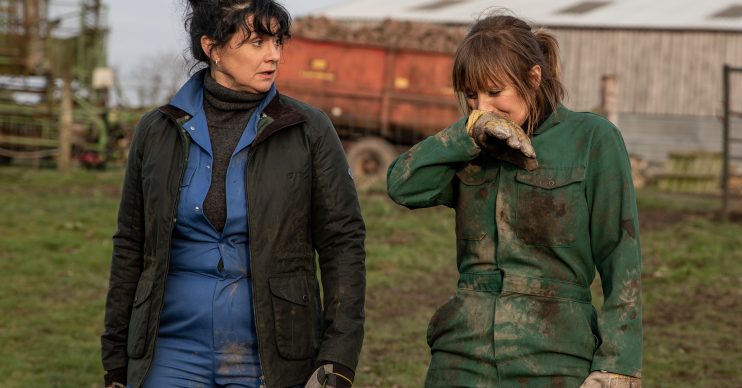 Could the pair be more than just good friends?

Emmerdale fans want Moira Dingle and Rhona Goskirk to have a lesbian fling!

Last night’s Emmerdale saw Rhona head round to see struggling Moira and offer her some support.

Rhona offered to look at Moira’s sickly lambs, and a concerned Moira insisted she couldn’t afford to pay her.

Kindhearted Rhona could see Moira needed help so insisted she would do it free of charge.

As the pair went up to the farm, Moira vented about there not being enough hours in the day and about how hard everything seems to be.

Rhona then burst into tears and agreed: “I feel like I don’t have anything to look forward to at the moment,” she shared.

Moira gave her a big hug and the pair took comfort from each other as they shared their troubles.

Fans are now convinced their friendship will build to something more.

I think it’s time for Moira and Rhona to have a girl experience. That should churn things up a bit. #Emmerdale

Why am I shipping Moira & Rhona this ep?? (The would have the ‘best’ ship name though.. 🤔)

#Emmerdale 🤔 are we gonna get Rhona & Moira together next 🤷‍♂️

You know, Moira and Rhona would actually make a great couple #Emmerdale

She decides to use it to go into business with Moira and save the struggling farm.

So with them being together 24/7 as they work on their new project, could their partnership turn into something more?

The soap’s other lesbian partnership, Charity Dingle and Vanessa Woodfield, captured fans hearts when they first got together in 2017.

At the time, the romance came as something of a surprise, but they have since become one of Emmerdale’s most popular couples.

Vanessa has had an operation to remove the tumour and the surgeon believes it’s been successful.

However, she still faces chemotherapy to beat the disease.