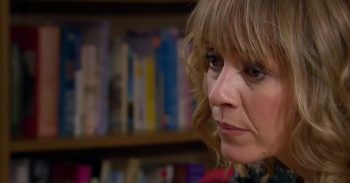 It would be easy to paint Emmerdale‘s Rhona Goskirk as a victim. She has battled with drug addiction and was raped by her husband on their wedding night,

Played by Zoe Henry, Rhona has fought tooth and nail not to be defined by either of these horrific parts of her life… not even psycho Pierce’s recent attempt to kidnap her has broken the village vet.

She’s a fiercely protective mother to Leo, a lover of a night out with the girls and the possessor of a dry wit with a dash of side eye.

Rhona’s first stints in the the village back in 2001 and 2002 were as a locum at the vet’s covering for Zoe Tate.

Paddy Kirk (Dominic Brunt) set her up on a date with Marlon Dingle (Mark Charnock), who fell for her after he’d been dumped by Tricia Fisher (Sheree Murphy), but that was scuppered when Tricia returned.

In real life Zoe Henry has been married to Jeff Hordley, who plays Cain Dingle, since 2003. She returned as Rhona in 2010 after Paddy had been attacked by step son Aaron Dingle (Danny Miller).

Rhona Goskirk: vet till she dies

Rhona has stayed true to her veterinary vocation throughout her time in the village although it has caused her plenty of trouble.

The lure of the surgery’s drugs cabinet proved too much to resist when Rhona became addicted to painkillers.

She almost ended up in another veterinary practice in the Lake District when abusive husband Pierce secretly acquired a lease and sprung it on her.

She also put Paddy and Vanessa’s nose out of joint by working with Kim Tate especially when Rhona agreed to give her son Jamie a job interview and subsequently a job.

Family for Rhona is her son by Marlon, Leo. Born with Down’s Syndrome Leo (now played by Harvey Roberson) has always been Rhona’s no.1 priority and woe betide any suitor who fails to recognise that.

When Rhona and Paddy got together they all almost ended up in New Zealand in 2012 after Paddy was offered a job there. But a scrap with a police officer stopped Paddy from going anywhere.

Rhona was horrified in 2016 when bruises were found on Leo’s half-sister April and it was discovered that Leo was responsible.

She might have started out with his best mate, Marlon, but Rhona and Paddy were meant to be and all would have been hunky dory if it hadn’t been for his drunken back seat bunk-up with Tess Harris.

Oh, Paddy, why did you do it? And why did you continue to do it with Tess once you’d sobered up and realised what you’d be losing with Rhona and Leo?

Rhona was still utterly shell shocked when she got swept up by Tess’s widower Pierce. They were both on the rebound after Tess was run over by a drunken Kirin Kotecha.

That relationship with Pierce nearly destroyed her but we can’t help thinking that the life is now slowly being drained out of her by pensive Pete.

Top of the list is Pierce Harris (Jonathan Wrather), husband no.2 and widower of Rhona’s supposed pal Tess.

A control freak who bit by bit isolated Rhona, Pierce raped her on their wedding day after months of mental and physical abuse.

When he was eventually brought to court Rhona got justice. It wasn’t just the five year prison sentence. Rhona confronted Pierce and took back all the power he had taken from her.

But that wasn’t the end of it! Recently, Pierce was released from prison and murdered Rhona’s fiance Graham, before holding her bestie Vanessa hostage.

He had some twisted fantasy that he and Rhona could run away together – but she trapped him, injected him with tranquilliser and got him banged up again!

Before Vanessa hooked up with Charity Dingle to form the dream team #Vanity, she was Rhona’s partner-in-crime.

This became a lot more complicated when V actually fell for Rhona. Even more so as this occurred in the middle of Rhona’s addiction to painkillers.

Many harsh words were spoken. “You’re needier than my son and he has special needs,” said Rhona to Vanessa when she confronted Rhona about her drug dependency.

Further down the line, Pierce also did his best to drive a wedge between the two friends and it looked like the damage might never be repaired. Thankfully in the end it was Vanessa that Rhona believed in.

With the recent news that Vanessa has Stage 3 bowel cancer, the best buddies will need each other more than ever.

Emmerdale’s writers have not been afraid of putting Rhona through some tough storylines.

Before Pierce there was her addiction to prescription pills in 2013 after Rhona hurt her back. It was a harrowing nightmare that consumed Rhona and all those who tried to save her for months.

She put Leo’s life in danger when she was car-jacked by Ross Barton while she was running round various pharmacies for painkillers.

When she collapsed and was close to kidney failure, Marlon took Leo. It was the fear of losing her son and her time in rehab that finally got Rhona into recovery.

Do you love Rhona? Leave us a comment on our Facebook page @EntertainmentDailyFix and let us know what you think.