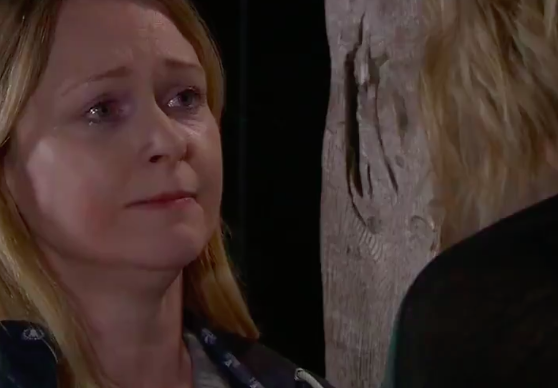 Vanessa Woodfield told Charity Dingle the devastating news that she has cancer last night, and Emmerdale viewers were heartbroken by the scenes.

On Thursday (February 27), Charity was left sobbing her eyes out after hearing Vanessa’s diagnosis and fans were in tears, too.

The night before, Charity and Vanessa were reunited in Emmerdale for the first time since Vanessa’s horrifying hostage situation.

Heartbreaking yet so well acted, especially by Michelle.

The vet was seen recovering in hospital after the arrest of her captor Pierce Harris.

In moving scenes, Charity poured her heart out to her partner, explaining her fears over losing her – unaware that Vanessa was secretly battling bowel cancer.

In heart-wrenching scenes, the pub landlady apologised for their past disagreements and pledged her future to Vanessa.

The next night, Vanessa knew she had to tell her partner the truth about her health.

Explaining why they can’t plan holidays and their honeymoon, she told Charity: “Just before Pierce took me, there was something that I needed to tell you.”

She continued: “Because I wanted to be certain. I didn’t want to worry you. If this could come at any other time. I’m so sorry.

“I had some tests done at the hospital and I’ve had the results. I’ve got bowel cancer.”

Charity was mortified by the horrible news, and was later seen crying her eyes out on her own.

Those watching from home were equally as distressed, with one tweeting: “This hurt my soul.”

This hurt my soul. ☹️

I Know This is going to be so sad

Another said: “Heartbreaking yet so well acted, especially by Michelle.”

“Well done for doing this storyline and well done to @ChelleHardwick and Emma Atkins. Thank you for highlighting bowel cancer thankfully my Mum survived it,” said one, while another added: “Made me cry.”

Last week, it was revealed that Vanessa had been diagnosed with bowel cancer.