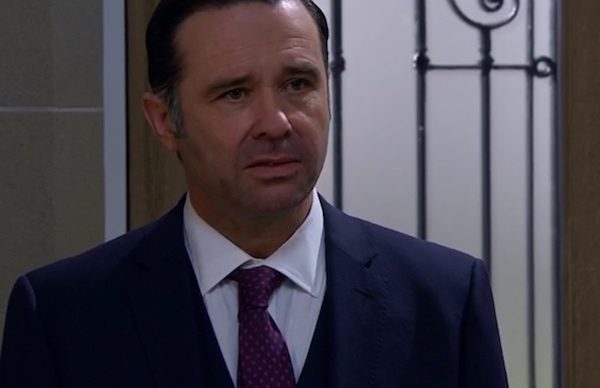 Who knew that what Emmerdale fans needed to set their pulses racing was an emotionally repressed cross between Bruce Wayne’s butler Alfred and Steed from cult TV series The Avengers?

Played by Andrew Scarborough, Joe Tate’s mysterious right hand man has proved an unlikely fan favourite with even more love for him since he’s been snapped on cast nights out.

Since Joe Tate disappeared and Kim Tate took his place at Home Farm Graham’s role has changed. He’s been on hand to take care of Kim’s dirty business – even in the bedroom – but more and more reluctantly.

If Kim disappears again is there life beyond the big house for Graham or could he end up owning it rather than just running it? As our potted history shows he’s capable – at least when he’s off the booze.

When did Graham Foster first appear in Emmerdale?

Graham first appeared in September 2017 at the swanky hotel where Charity and Debbie were trying to raise more cash for their luxury car hire business.

At first it appeared, at least to Charity, that Graham was the multi-millionaire Tom Waterhouse (aka Joseph Tate) looking to invest.

That case of mistaken identity continued when Debbie mistook the real Tom/Joe for a waiter when he offered her a glass of champagne dressed in black tie in his penthouse suite.

When it comes to being suited and booted it’s Graham that’s the real stickler for formal attire. It’s his armour and without it he’s usually in big trouble.

When did Graham become an alcoholic?

Graham’s heavy drinking began in his army days when he was serving in Iraq and Afghanistan. He was discharged from the army because of it.

He really hit the bottle after his wife’s death although he was already putting away a bottle of whisky a day when he was with her.

When he first arrived in Emmerdale he had been sober for six years and Joe did everything he could to keep temptation out of his way.

Graham really lost the plot much later after he was forced to fake Joe’s death and say goodbye to him forever. Things got so bad that he poured beer on his cornflakes – and kind of liked it.

A bit of Tate family history to unpack. Joseph Tate is the orphaned son of Chris Tate (Kim’s stepson after she married his dad Frank who she left to die) and Rachel Hughes.

After the death of both parents Chris’s sister Zoe became Joe’s guardian. She packed him off to boarding school where he became friendly with groundsman Graham.

Graham accidentally set his own hut on fire and it was Joe who saved him. Eternally in Joe’s debt the pair bonded and Zoe made Graham Joseph’s guardian to try and keep him out of trouble.

Graham agreed to help Joe execute his plan to get revenge, especially Charity, who Joe blamed for his dad’s death. In fact, Chris took his own life and framed Charity.

Graham became Joe’s surrogate father protecting him all the way till Joe’s shock exit from the show when it appeared either Cain or Graham himself had killed him.

A special flashback episode showed the day that Graham’s wife Cheryl and their unborn daughter died as the result of Graham’s actions.

He had collected Cheryl, laden with balloons from her baby shower, already drunk and wasn’t in the mood for any concerns she had about his driving capabilities.

Cut to the car smashed into a tree, Cheryl trapped by her seatbelt and no battery left on Graham’s mobile. Before he could get help the car exploded.

“That was the worst day of my life,” reflected Graham before correcting himself. “Every day since has been the worst.”

What is Graham Foster’s relationship with Kim Tate?

Graham and Kim were already having an affair when his drink driving resulted in his wife and daughter’s deaths. It was Kim on the phone before they drove off and Kim who Graham called for help as Cheryl perished.

Kim and Graham’s relationship is a complicated one. Kim would have it that she has Graham wrapped around her little finger (or tied to her bedpost) but Graham can’t forgive her for ordering him to kill his surrogate son Joe.

Quite why Graham still puts up with her is unclear. Is Kim really the love of Graham’s life? His wife suspected as much.

“You never loved me,” Cheryl’s ghost told Graham through a haze of quality Shobu whisky. “You tried to escape me. You drank, you bullied, you cheated. And then you killed me.”

So what will he end up doing to Kim?

Why did Graham Foster beat up Joe Tate?

“Don’t push me, Joe.” Joe refused to give up on Graham when he fell off the wagon after seven years of sobriety reasoning that Graham never gave up on him.

Unfortunately Graham was so full of self-pity that he didn’t want Joe’s help and even blamed him for saving Graham from that school fire.

“You had no right to save me,” roared Graham. “I wanted to burn and you stole that from me.”

When Joe suggested Graham might have actually been relieved to have been rid of his wife the red mist descended and Joe was left a bloody mess by the roadside. Worse was to come.

What happened between Graham Foster and Megan Macey?

Graham and Megan had an affair in 2018 when Megan was fed up with partner Frank Clayton and thought he was cheating on her.

Graham called her “completely and utterly amazing” and complimented her on her wine choices after Megan dealt with a tricky Home Farm client. Megan responded with a smouldering kiss on the lips.

Sadly Graham was not great about showing his feelings and things went pear shaped further down the line when Megan got carried away whilst stroking his hairy chest and said she loved him.

The real death knell of their relationship was when Kim got her claws back into Graham. Megan caught them at Home Farm on the day they were due to head off on a family weekend away.

“Go now. Or we can keep doing this until you change your mind.” – Graham shocked everyone when he went into full ninja attack mode and took out Joe Tate’s builders as they tried to demolish the Dingles’ home with Noah and Samson still inside it.

What is your favourite Graham moment? Leave us a comment on our Facebook page @EntertainmentDailyFix and let us know what you think