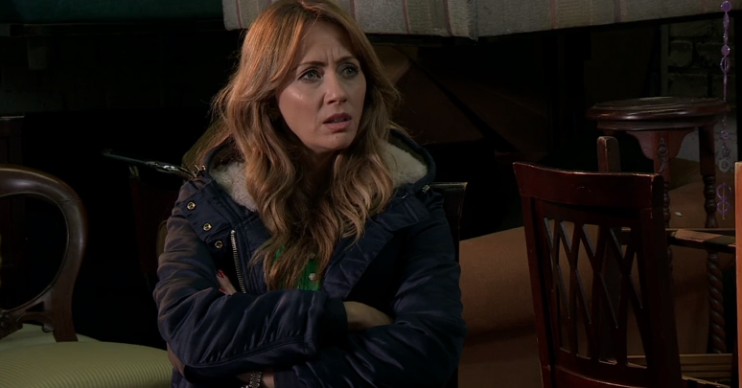 Actress Samia Longchambon, who plays Maria Connor in Coronation Street, has hit back at fans of the soap who have called her alter ego “stupid.”

After months of lies from boyfriend Gary Windass, Maria continues to be taken in by him – and fans haven’t held back on their feelings on Twitter, leading to Samia responding.

Viewers know Maria recently told new boyfriend Gary that she is pregnant with his baby.

After finding out the news, Gary, who is a loan shark, quickly began splashing the cash buying Maria a 4×4 and suggesting they look at a flat in Victoria Court.

Read More: Coronation Street: Where have you seen Tim’s wife, Charlie Wood before?

Worried, Ali warned Maria that Gary is dangerous and is in fact a loan shark.

In last night’s episode of the show (December 11 2019) market trader Big Garth came into Dev’s shop to put up a poster for the Weatherfield Winter Wonderland and quickly spotted Maria’s designer bag.

She told him that it was a fake but Big Garth asked to take a look, as he knew how to spot the knock-offs.

When he saw the serial number he told Maria that her bag was the real deal leading her to confront Gary.

Ok Twitter Corrie fans… I get it. #Maria is really, really gullible. I’ll pass that on…

Gary admitted the handbag, which costs £895, was real but told her the reason he lied about its authenticity is because they hadn’t been together long.

Maria started questioning her new beau on how he can afford the flat, and car, along with other things.

He was quick to feed her lies saying that things were going well with Derek throwing money at the factory and that the furniture shop was a “little goldmine.”

Gary explained he buys stock and moves it on quickly and recently made three grand profit buying and selling a load of furniture in the same day.

Gary was truthful when he told Maria about his situation with Ryan Connor, who stole money off him, but lied once again telling her he isn’t a loan shark.

Of course, Gary told Maria that Ali had been feeding her lies and she believed her boyfriend.

Oh come on Maria you can’t be that thick, if a lads buying you designer bags, cars and everyone is scared of him he’s not your average fella #Corrie

Maria deserves all she gets for being so stupid #Corrie

Maria really is rather thick! #Corrie

#Corrie Maria is an idiot. It will all end in tears, trust me.

In fact, actress Samia Longchambon received so many comments, she decided to reply to her fans.

In a tweet she wrote: “Ok Twitter Corrie fans… I get it. #Maria is really, really gullible. I’ll pass that on… #troubleahead #corrie @itvcorrie.”

Ok Twitter corrie fans.. I get it. #Maria is really, really gullible. I’ll pass that on… 🤦🏻‍♀️😂😬 #troubleahead #corrie @itvcorrie

Speaking about what it would take for Maria to realise what Gary is like at a recent press event, Samia told ED!: “I think a lot of stuff comes out after Christmas, with everything that happens on Christmas Day, inevitably Maria finds out about a lot.

“And then we’ll see what her decision is, whether she decides to stay with him and stand by him, or whether she throws the towel in.

“It’s been really exciting filming this storyline, because there’s so many twists and turns, and there’s so many times I’ve gone, ‘Maria, just end the relationship! leave him!’ but then actually, you understand why she stays with him, because she believes that he’s this good guy.”