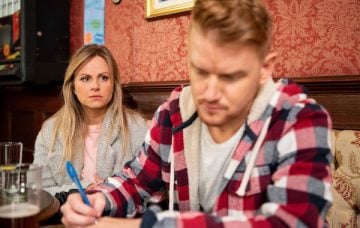 Coronation Street’s Sarah Platt and Gary Windass: The history of their relationship

Has Sarah found her Mr Right?

Sarah Platt and Gary Windass weren’t the most likely pairing when Coronation Street brought them together in 2016.

But after her traumatic experience with drug dealer Callum Logan, perhaps what Sarah needed was a down-to-earth family man. If you can call Gary that.

Their relationship hasn’t been smooth sailing though. He’s cheated, fathered a child with someone else, gone after dangerous Pat Phelan for revenge, and now got himself mixed up with dangerous loan shark Rick Neelan. Not quite the quiet life Sarah desired.

Here’s a look at the history of their relationship.

When did Sarah and Gary first meet?

Sarah (Tina O’Brien) and Gary (Mikey North) first fell into each other’s orbit in 2016 when he helped her daughter Bethany Platt (Lucy Fallon).

Bethany was taking diet pills and over-exercising at the gym where Gary was the manager and he took her under his wing and looked after her.

She was being subjected to vile bullying by schoolmate Lauren and her gang, and when Bethany cracked and hit Lauren, Gary witnessed it and decided to go to Bethany’s school and report the bullying.

Sarah then confronted Gary over why he was hanging out with her daughter so much, causing Bethany to admit the truth. Sarah was horrified when she realised Gary knew about the diet pills and calorie counting and fumed that he should have told her what was going on.

But she soon realised he was trying to help Bethany and they began grow closer – with no idea Bethany’s crush on Gary was intensifying.

When Bethany invited Gary to Nick’s flat thinking he liked her too, a mix up meant Sarah also showed up. The couple concluded that Bethany had set up the romantic meal to give them her blessing to pursue a relationship. They kissed on the balcony, witnessed by a distraught Bethany.

When did Sarah and Gary split up?

Gary took Bethany and his sister Faye Windass (Ellie Leach) to a gig and Bethany saw it as the perfect opportunity to snare her man. She tried all she could to seduce him – even plying underage Faye with vodka to keep her quiet when she was caught lounging on Gary’s bed.

After Gary unwittingly rejected her, Bethany went on a downward spiral and took more diet pills, before collapsing. She was discovered by stranger Nathan Curtis (Chris Harper) who took her to hospital.

Sarah then discovered the truth about Bethany’s crush on Gary and asked her daughter if Gary had led her on in any way. Bethany insisted he hadn’t, but Sarah dumped Gary anyway for the sake of her family.

But Bethany, who was referred for therapy, told her mum it was OK for her to date Gary.

Why did Gary leave for the Ukraine?

Officially a proper couple, Sarah and Gary started to plan for their future, and Gary was once again a rock when Bethany was involved in a grooming storyline that saw her raped and nearly sold to a sex ring by Nathan.

But Gary was struggling with money. He took work on a local building site and fell off the roof without being insured so found himself owing £10,000 for the damage.

Gary was then offered a well-paid, but highly dangerous job at a security firm in the Ukraine. Knowing with his previous history of Post Traumatic Stress Disorder it wasn’t a good idea for him to take it, Gary lied to Sarah that he was going to work with his dad in Germany.

He returned with nasty injuries, vowing not to go back, but with Sarah excitedly looking at properties they could buy for their first family home together, and his son with Izzy Armstrong, Jake, needing speech therapy, Gary could see no other option than to take the risky job again.

When did Gary cheat on Sarah with Nicola?

He returned after another stint with more bruises and bottling up his anger. He tried to make things right with Sarah by spoiling her, but when she refused a night out on the town because of work, he sulked off on his own.

He bumped into Nicola Rubinstein (Nicola Thorpe) in a bar and unaware she was the long-lost daughter of his arch enemy Pat Phelan (Connor McIntyre), proceeded to pour out his worries.

When he found out who she was, he told her to stay away from him, but after another row with Sarah over his increasingly aggressive behaviour, he turned to Nicola once again.

A friendly ear and some kind advice soon turned into a bunk up and the pair had a one-night stand.

Gary later denied he’d spent the night with another woman to Sarah, but the whole sorry mess came out when Nicola found out she was expecting Gary’s baby.

Gary had been back in the Ukraine and was presumed dead after an explosion, but he walked back into the Platt house just before Christmas 2017 alive and well.

Sarah was delighted, and then devastated all over again when brother David Platt (Jack P Shepherd) revealed the truth about Gary’s baby with Nicola. Sarah dumped him immediately.

When did Sarah and Gary get back together?

Gary was desperate to win her back and sent a string of apologetic messages to Sarah – all of which were deleted by Bethany, who was so burned by her experience with Nathan, she’d lost faith in all men.

Bethany even set up a honey trap to prove Gary couldn’t be trusted sending in one of her lapdancing colleagues to seduce Gary while he was supposed to be waiting for Sarah.

It didn’t work though and after a disastrous date with Aidan Connor where there was no chemistry at all, Sarah decided she could live with Gary’s misdemeanour and even with the child he was having with Nicola, and the pair reconciled.

Nicola gave birth to her son, Zack, in May 2018, days before her evil father Phelan returned from the dead.

Gary was responsible for bringing him back to the Street and Sarah was horrified when she found out her other half had him tied up in the builders’ yard. Gary’s vigilante attempts went wrong when Phelan escaped and reigned terror on Weatherfield, even shooting Nicola.

When Nicola then found out Gary was the one who had brought Phelan back, she stopped him seeing his son, but eventually relented. Although she then decided to move to Bristol in June 2018.

Are Sarah and Gary solid now?

Gary has since visited his son, and angered Sarah by lavishing designer gifts on him while they were so strapped for cash they were sleeping on lilos in the Platts’ living room.

As his money troubles continued and he fell behind with his maintenance payments, Gary contemplated taking another dangerous job, this time in Qatar.

A fed up Sarah had had enough and had a flirtation with Adam Barlow (Sam Robertson). However, she pulled away when he tried to kiss her, insisting she loved Gary. But that didn’t stop Gary going mad when he found out.

Seb Franklin (Harry Visinoni) then tried his luck with Sarah, leaving Gary even more furious, but despite his increasingly nasty behaviour, Sarah continues to put up with Gary.

Now Gary’s in really deep, though – he’s lied to the police about the factory roof after taking a bribe from Peter Barlow to protect Carla, even though Sarah begged him to tell the truth.

He’s also in totally over his head with loan shark Rick Neelan and the coming weeks are set to get even more dangerous for Gary.

Can Sarah forgive him again when she finds out just what a mess he’s got himself into this time – or will this be one mistake too many?

Read more: Coronation Street’s Tracy and Steve: The history of their relationship

Do you think Sarah and Gary are a perfect match? Leave us a comment on our Facebook page @EntertainmentDailyFix and let us know what you think!