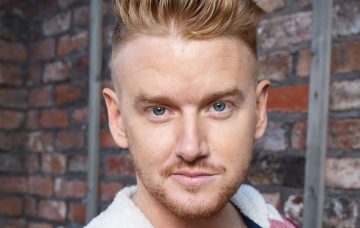 10 facts about Mikey North – the actor who plays Gary Windass

He's been on Coronation Street for more than a decade

Mikey North has been playing Weatherfield’s Gary Windass since November 2008, and in that time he has fought to bring down notorious serial killer Pat Phelan, battled with PTSD after joining the army, and had relationships with Coronation Street women like Alya Nazir, Izzy Armstrong, and currently, Sarah Platt.

But while he might be on our screens every week, how much do we know about the actor?

1. He was a successful actor very early on

Mikey was such a budding young actor that he got an agent at the age of just 18 while he was at Scarborough Sixth Form College.

But his first big break came when he won the British Theatre Guide’s award for most promising newcomer for his role in theatre production Bottle Universe – his first ever acting job.

While Mikey might be an actor first and foremost… it might be a surprise to know he can also sing! Back in 2010 he released a single along with a whole host of other celebrities to raise money for ABF The Soldiers’ Charity.

Among the other famous faces on the charity version of the Queen hit ‘No One But You (Only The Good Die Young)’ were Darren Day, former Corrie and Waterloo Road actress Poppy Jhakra, Holby City star Ian Aspinall, and X factor finalist Rachel Hylton.

3. He learned to drive on national TV

After coming to the decision that now he is a dad he should really learn how to drive, Mikey went the whole hog and invited the nation to watch him take lessons as part of reality TV show All Star Driving School.

While you’d think that being on one of the most popular TV shows in the country Mikey would be used to spending his time on front of the camera, apparently he was absolutely terrified!

4. Mikey’s a proud father and husband

Mikey married his wife, Rachael Isherwood in January 2016, three years after meeting in a bar in Manchester.

The pair now have a two-year-old son called Archie, whose arrival they managed to keep a secret from the world for three whole months before officially announcing it in OK! Magazine.

Mikey has admitted that juggling fatherhood with filming for Corrie is tricky, and that if he has got a big day filming the following day then he will sleep in the spare room. Failing that, he has also confessed to having secret naps in his dressing room at work!

5. He wanted to name his son after his dad

Mikey and Rachael revealed to OK! Magazine that not only do they think Archie was conceived on their wedding night in January 2016, but that it took them a long time to agree on a name for their new arrival. Mikey said: “It’s just Archie, he has no middle name. We had massive arguments and just couldn’t agree at all.

“From when I was a child I’ve always wanted my first son to have my dad’s name, Martin, as their middle name. But Rachel wasn’t having any of it!”

While we couldn’t imagine him playing anyone other than Weatherfield’s resident builder, Mikey appeared in many well-known shows before stepping foot on the cobbles.

The actor has been in programmes like Doctors, Britannia High, The Royal Today and he was even in The Bill for one episode playing a character called Scott Gibbs.

But before Coronation Street, Mikey was probably best known for his role in Waterloo Road where he appeared in four episodes as the character Helmsley.

7. His wife wants him to do Strictly Come Dancing

It has been hinted that Rachael would love her famous husband to take part in the BBC dance competition, but it seems Mikey isn’t that keen.

Rachael is a dancer herself and wanted to choreograph their first dance at their wedding, but Mikey had confessed the only reality TV show he could be persuaded to do would be I’m A Celebrity, Get Me Out Of Here!

Mikey might have been in Coronation Street for more than 10 years, but it is his most recent storylines that have been his favourite…

In a recent interview, he told Mirror.co.uk: “My favourite period was working under Kate Oates. It has turned my time around here, I have been getting better storylines. So I suppose I’ve saved the best till last of my 10 years here.”

Mikey credits Coronation Street for introducing him to his best friend, Ian Puleston-Davies, who played his on-screen mum’s boyfriend, Owen.

He told Mirror.co.uk: “He’s become my best friend and was even best man at my wedding, so I have Corrie to thank for his friendship.”

While you’d be forgiven for thinking Mikey’s talent is acting, he has revealed in the past that he is actually a very talented cricket player.

He apparently played for Yorkshire when he was 15 and reached a high level before turning his attention to acting instead.

What has been your favourite Gary Windass storyline in the last 10 years? Leave us a comment on our Facebook page @EntertainmentDailyFix and let us know what you think!