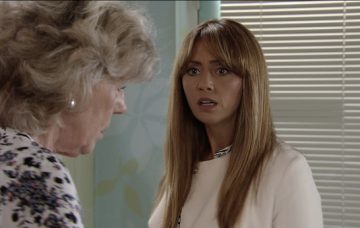 She hasn't had a lot of luck with relationships

Viewers of Coronation Street have branded Maria Connor ‘desperate’ after she forgave Ali Neeson for nearly setting her flat on fire with her son Liam inside.

In last night’s episode (October 7 2019) Maria was thrilled when Ali offered to look after her poorly son Liam whilst she went to work.

She was on cloud nine after Ali told her he was falling in love with her.

However, the excitement was short-lived when Emma and Claudia heard the smoke alarm going off in Maria’s flat.

Along with Gary and Ryan, they managed to get into the flat and it turned out Ali had fallen asleep after putting a pizza in the oven for Liam.

Maria was obviously upset with Ali and shortly after the incident, Ryan found pills in Ali’s coat pocket.

But later Maria felt she had been too harsh on Ali and went to apologise for having a go at him.

However, she was left stunned when he broke things off with her.

Later, she confronted Ali and demanded to know why he told her he loved her and then dumped her.

Ali told Maria he didn’t want to raise someone else’s child and left her heartbroken, but she has no idea he has an addiction.

She later picked a fight with Ali’s mum, her friend, Michelle, leading Gary to step in and break things up.

Fans are a bit fed up of Maria and her ‘desperate’ quest to find – and hold onto – a man.

Maria comes across as desperate #Corrie

Is Maria for real. Is she SO desperate for a relationship that she'll forgive a man who almost killed her child. I would be shopping him to the police for being a drug-taking doctor. He should be struck off…not least for looking so rough #Corrie

The hairdresser has a track record of not picking the best fellas on the Street – or going after other people’s men.

She tried to steal Tyrone from Fiz a few years back, and she also had an affair with Aidan Connor behind his girlfriend, Eva Price’s back.

Years ago, Maria slept with Toyah Battersby’s boyfriend as well.