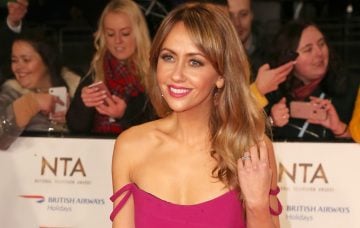 10 facts about Samia Longchambon – the actress who plays Maria Connor

During that time she has been at the centre of some of the soap’s most dramatic storylines, from going to prison, her attempted rape at the hands of evil Frank Foster and suffering a heartbreaking stillbirth back in 2008.

1. Samia has been in Coronation Street for almost 20 years

Having been on our television screens for the best part of two decades means soap fans have watched Samia grow up before their very eyes.

She first appeared in Coronation Street as a kennel worker, and got engaged to Tyrone Dobbs after he proposed on top of the Blackpool Tower. But their engagement came to an end before they could make it down the aisle when Tyrone fell for Fiz Stape.

These days Maria is better know as a hairdresser and has a nine-year-old son called Liam, who she named after his late father, Liam Connor.

Having worked on Coronation Street for such a long time means some of Samia’s closet friends are part of the cast.

The actress has revealed that as well as being friends with Jane for more than 20 years, she is also very close to Andy Whyment, who plays her on-screen brother Kirk, and also Alan Halsall, who plays Tyrone Dobbs.

Samia was thrilled when Jane was partnered with her husband Sylvain on this year’s Dancing On Ice and was their number one supporter.

3. Samia met her husband on Dancing on Ice

Samia met husband Sylvian Longchambon in 2013 when they were partnered together on skating reality TV show, Dancing On Ice.

The pair married three years later and live in Cheshire with Samia’s daughter Freya from a previous marriage, and their son together, Yves.

As well as marrying the man of her dreams in 2016, Samia was also lucky enough to have her wedding in a very special location.

The pair wed in Delamere Manor in Cheshire, which just so happens to be the former home of Take That star Gary Barlow.

Samia told the Mirror.co.uk last year that she has suffered with crippling anxiety attacks for the last 25 years, and sometimes they’re so bad that she starts to fear the worst.

“You feel like you’re going to die, you can’t breathe. You’re absolutely shattered afterwards. I wouldn’t wish them on anyone, they are horrible.”

But thankfully her husband, Sylvain, knows exactly what to do when an attack hits… “He’s brilliant and if I’m having an attack he will hold me really tight and reassure me in a calm voice that everything is going to be okay.”

6. Maria wasn’t the first role in Coronation Street that Samia auditioned for

Before landing the role of Maria, Samia auditioned for the part of the daughter of Des Barnes’ girlfriend in the soap.

Ironically the role went to Emily Aston, who is the real-list sister of Sam Aston, who plays Weatherfield’s Chesney Brown.

In fact Samia was so upset when she didn’t get the part that she cried… but we think she definitely got the better end of the deal eventually!

Samia’s first ever job was working on Cracker alongside Robbie Coltrane when she was just 11 years old.

The actress has admitted that she was too young at the time to realise what an amazing actor he was and so didn’t get star struck at all. She said that these days it would be a very different story!

8. Samia is a trained reflexologist

She might be a famous actress, but that doesn’t mean Samia is resting on her laurels… last year she successfully trained as a reflexologist. Samia fell in love with the complementary therapy when she did a baby reflexology course with her son, Yves, when he was little and has said that she loves how relaxed it makes you feel.

The actress trained at home and had to send her lessons off to be marked by a teacher, and even had to do a practical test at the end of the course. Very impressive!

Despite having moments when she thinks she might like to leave Corrie and try her hand at something new, Samia has admitted that she loves her job and is grateful that she has had the chance to grow up alongside her character.

The actress has admitted that she’s not very good at multitasking, and so when they ask her to pretend to cut someone’s hair during filming, she finds it really hard. She once revealed: “I nearly cut off Kate Ford’s fringe once. I was doing a scene and grabbed her fringe… they really shouldn’t give us proper scissors!”

“I also once nearly took Barbara Knox’s (Corrie’s Rita Tanner) head off. We have these old fashioned dryers in the salon with a visor that comes down. Rita was under the visor and I pulled it back without lifting it up and Barbara’s head just went with it!

What has been your favourite Maria moment on the cobbles? Leave us a comment on our Facebook page @EntertainmentDailyFix and let us know what you think!