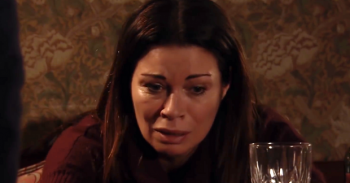 He died by suicide almost exactly a year ago...

Carla Connor is in a very dark place ever since the roof of her factory collapsed and crushed several Weatherfield residents, tragically killing Rana Habeeb on her wedding day.

Believing herself to be responsible for the tragedy, as does much of the Street, Carla is falling down a rabbit hole of paranoia, self-loathing and psychosis.

While Carla believes her own negligence led to the roof of Underworld coming down, viewers know that an anonymous villain sabotaged the roof – making them responsible NOT Carla.

But, until the truth comes out, Carla is in her own hell. Kate has sworn never to forgive her, and even faithful friend Roy has turned his back on her.

As Peter watches on in concern, Carla has been getting increasingly paranoid, irrational and lost as Corrie scriptwriters take her character down a dark mental health storyline.

In upcoming weeks, Carla goes missing and is eventually put on anti-psychosis drugs, but viewers are worried she’s destined for the same fate as her half-brother Aidan.

Aidan took his own life in a devastating storyline which aired last year.

Almost exactly a year ago, in May 2018, Aidan’s distraught dad Johnny found his son had died by suicide.

Viewers fear Carla plans to do the same.

This isn't the same as Aidan's storyline but it is important that it's portrayed truthfully, and that's what Corrie is doing with Carla's psychosis story. There's no denying that it's going to be extremely difficult for her, as it certainly is for many people in the real world

Poor Carla is having a breakdown #corrie

One concerned fan wrote: “I think Carla is going to attempt suicide #Corrie.”

Another said: “If Carla is going the same way as Aidan’s character did, it’s not entertainment it’s just another message how depression and breakdowns are not understood that can lead to suicide.”

However, a third replied: “This isn’t the same as Aidan’s storyline, but it is important that it’s portrayed truthfully, and that’s what Corrie is doing with Carla’s psychosis story.

“There’s no denying that it’s going to be extremely difficult for her, as it certainly is for many people in the real world.”

“Poor Carla is having a breakdown,” lamented another, while one more added: “Poor Carla needs help urgently.”

“I’m kind of expecting some form of self harm or suicide attempt at the end of all of this,” added another. “But I won’t accept Carla to be killed off in any other way than by Peter’s side Romeo and Juliet style.”

In fact, Carla did attempt suicide once before, in 2011, after she was raped by partner Frank Foster. She downed red wine and pills but then called Peter.

If you or anyone you know are struggling with mental illness or suicidal thoughts, call the Samaritans on 116 123.