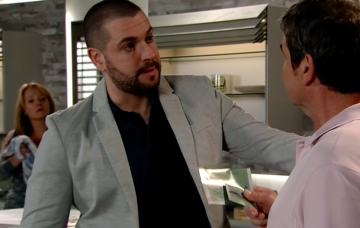 The devastating scenes will play out this week on Corrie

Aidan Connor’s goodbye to his dad Johnny is going to be heartbreaking in Coronation Street.

The soap has revealed a spoiler clip of the moment downcast Aidan arrives at his dad’s apartment to give him a card and a moving present ahead of his move to Spain.

“I just wanted to catch you before the party and give you this,” he tells Johnny while handing him a card.

“It’s just a little something to… you know,” he adds.

Johnny is shocked to receive such an expensive gift of a year’s golf club membership from his son.

Read more: Corrie fans in bits ahead of next week’s shocking scenes

Viewers know that Aidan will soon take his own life in heartbreaking scenes, which will make the scene with Johnny all the more poignant.

It was recently revealed that in the aftermath of Aidan’s death, Johnny will struggle the most with the loss of his son.

Tragically, Johnny is the one who finds Aidan’s body in this week’s hour-long special on Wednesday 9th May.

When Aidan fails to turn up for work, Johnny innocently thinks his son has slept in, so he lets himself in to his flat – only to find Aidan in the bathroom, a scene viewers will be spared from.

Utter devastation follows, as the family and residents of the Street let the terrible news sink in that the factory owner is dead.

In the days after, Johnny becomes convinced that something must have happened to cause Aidan to take his own life.

He will blame himself for failing to see what Aidan must have been going through.

Corrie boss Kate Oates has explained the importance of the storyline in encouraging people to speak out when they are suffering.

This scene will air in Coronation Street on Monday 7th May on ITV.