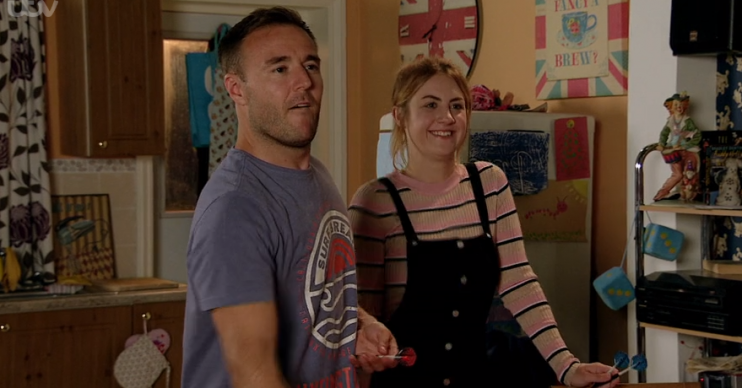 Fans were speculating recently they wold have an affair

They are often touted as the modern-day Jack and Vera and, just like the Duckworths, Tyrone and Fiz are no strangers to a rocky relationship.

And it looks as though they are about to hit another bump in the road in next week’s Coronation Street as Jade makes a pass at Ty!

As the week begins, Jade turns up at the garage and begs Tyrone (played by Alan Halsall) to let her see Hope again.

He is non-committal and, when she later turns up at the house saying it’s her birthday, Ty gives her short shrift.

Being the soft-touch we all know him to be, surely it’s only a matter of time before he caves in, though?

Indeed, we don’t have to wait long to test out that theory as, come Wednesday, he admits to Fiz that he has bought a bracelet for Jade – at Hope’s insistence.

In the cafe later, Hope gives the piece of jewellery to her big sister and says it was Tyrone’s idea.

She calls into the garage to thank him for it and, when he is kind to her, Jade makes a pass at him!

Of course Ty stops Jade in her tracks, but she appears to have convinced herself that he had feelings for her.

To be fair to her, even Corrie fans have been speculating that the pair would end up having an affair recently.

Tyrone later catches up with her and explains that he doesn’t love her and is very happy with Fiz.

Then, who should appear but his missus, who threatens to knock Jade out (and she’s none too happy with her fella either).

Surely they’ll want her out of their lives for good now, but will Jade finally take the hint?

She’s been a thorn in the couple’s side for long enough now, after ingratiating herself into the family’s life.

Poor Fiz had no idea she had invited the daughter of her psycho killer husband John Stape into her home.

Convinced that Fiz was to blame for her being fatherless, Jade set about trying to steal her half-sister away from her.

The truth came tumbling out and Fiz ended up attacking Jade – she’s now using this against her to try and remain in Hope’s life.