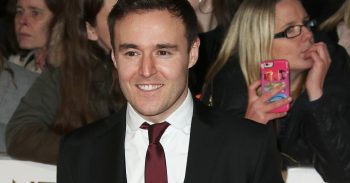 Corrie’s Tyrone is a proper stalwart of the Street, having been on our screens for over 20 years!

During his two decades on the show, he’s notched up a string of dramatic storylines – including becoming a victim of domestic abuse at the hands of his ex-partner Kirsty Soames, and finding out that his wife Molly had been having an affair with his best mate, Kevin Webster.

But despite everything he’s been through, Tyrone never stops smiling. Here’s everything you need to know about the actor who plays him, Alan Halsall…

Unlike many of his co-stars, Alan didn’t go to a fancy drama school. He attended Walkden High School in Salford – and admits that he only got into acting after his mates dared him to go to an audition for TV show Children’s Ward!

“I went along for a laugh and ended up getting this job – and I loved it,” he told Celebs Now. “At that age I didn’t know I wanted it to be a career, I just knew I loved it. Then it snowballed.” He’s been acting ever since.

Alan left school at the age of 16, and went straight into Coronation Street. Tyrone first appeared on our screens on November 30, 1998, after his mum abandoned him, and he moved in with Jack and Vera.

During his time on the cobbles, Tyrone has romanced Maria Connor (Samia Longchambon) on more than one occasion, as well as dating Eileen’s half-sister, Julie Carp. He’s currently engaged to Fiz, and the pair share a house with his daughter Ruby and Fiz’s daughter, Hope.

3. Alan was married to a former co-star

Alan began dating his Corrie co-star Lucy-Jo Hudson (who played Katy Harris) after they met on set in 2005. The pair got hitched in June 2009, in a lavish ceremony in Cheshire attended by many of their cast mates.

The couple split in 2016, only to get back together several weeks later. Sadly they parted ways for good in May 2016, when they announced their divorce. Their break-up was said to be amicable, and the pair remain good friends.

Alan posts many adorable photos of Sienna on his Instagram account, with cute captions like this one: “There is a girl who stole my heart, and she calls me Daddy”. It’s clear that the five-year-old is the most important person in his life. Aw!

As well as welcoming baby Sienna into the world, Alan also had a lot of other big things to celebrate in 2013.

He won the National Television Award for Outstanding Serial Drama Performance, as well as the British Soap Award for Best Actor.

Both awards came off the back of a dramatic year on the cobbles for Tyrone, during which he was accused of abducting his baby daughter Ruby, and assaulting his girlfriend Kirsty – neither of which were true.

6. He underwent a body transformation

Following his split with Lucy-Jo, Alan decided to focus on his fitness – and became a gym junkie! In August last year, he told The Sun that he likes to go to the gym three times a week, and pretty much spends all day there.

“I come here and learn my lines,” he revealed. “I have a pre-workout meal, work out, then I have a post-workout meal and a swim or a steam.”

We’d say all of Alan’s hard work is paying off, judging by the buff snaps he’s been sharing on his social media!

But Alan didn’t stop at overhauling his body – he wanted to transform his receding hairline, too. Alan enlisted the help of Dr Bessam Farjo at the Farjo Hair Institute in Manchester in 2016 – but it wasn’t until he went back almost two years later that he noticed the results.

“Finally off to see @BessamFarjo for my after pictures nearly a year late,” he wrote on his Instagram account. “I’m more nervous to see my before pics as I’ve never seen em”.

8. Alan’s rumoured to be dating a former co-star

Alan sparked rumours that he’s dating former Corrie co-star Tisha Merry, who played Steph Britton in the soap, after he posted a picture of the two of them looking very cosy together at a rugby match.

Although The Sun reported that the pair had grown close, with Tisha even having met Alan’s family, neither star has confirmed that they are dating.

However, Alan’s ex-wife Lucy Jo confirmed that Alan was in a serious relationship, and that his new girlfriend has met their daughter, Sienna! So is Tisha the lucky lady?

9. You can book him to appear at your event!

According to the Champions website, Alan is available for hire for public speaking events. All you need to do is fill out a form with your contact details, an event description and the date you would like Alan to appear.

The site doesn’t specify how much it costs to hire Alan, although you are required to submit your budget. And if Alan doesn’t fit your requirements, you could always hire his co-stars Bev Callard (Liz McDonald) or William Roache (Ken Barlow) instead!

Alan’s pad took four years to build from start to finish – and it sounds like it was well worth the wait!

The house has five bedrooms, a luxury bathroom, a huge entrance hallway, and there’s even room for daughter Sienna to take dance classes! We bet that house has seen its fair share of parties since he moved in last year, too…