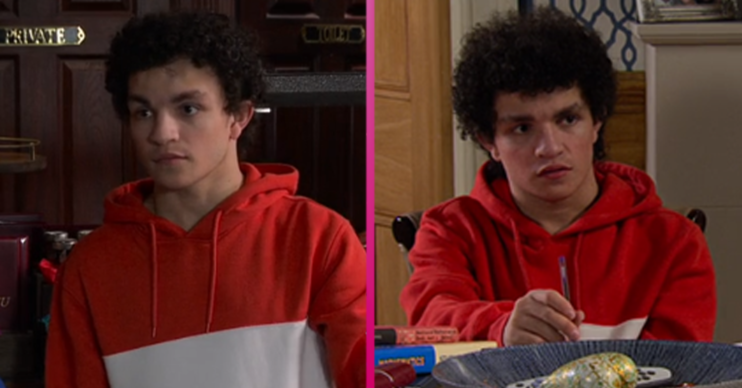 Back in March, filming was stopped due to the coronavirus pandemic. The halt in production means some scenes that are on-air currently were either filmed post-lockdown, or just a couple of weeks ago.

This has resulted in a few continuity errors regarding appearance. And it seems like Corrie fans have noticed another character’s quick change in appearance.

In Wednesday’s visit to Weatherfield (July 8) Simon appeared in a scene in the Rovers, sporting his short curly hair.

However after the ad break, it appeared his hair had grown and eagle-eyed viewers were quick to point it out.

#Corrie Simon’s got an Afro!

This isn’t the first time fans have noticed a quick change in appearance between scenes.

Earlier this week, viewers noticed Nick Tilsley had grown a beard and changed his hair colour in between scenes.

Last week, Leanne ended up upsetting her stepson Simon when she said she will have nothing if her son Oliver dies.

As Leanne has been a mother figure to Simon, he was offended by her comments and ended up moving back in with his dad, Peter.

However in Wednesday’s episode, Leanne went to visit the teenager, asking him to come home.

But Simon isn’t the only one who Leanne has pushed away.

Earlier this week, she ended up making some unthoughtful remarks to her sister Toyah.

She insisted that Toyah had no idea what she was going through with Oliver being ill, as Toyah can’t have children.

However in tonight’s episode (Friday, July 10) Leanne will apologise and Toyah forgives her.

Later Toyah comes round with her friend Josie, who runs a support group for parents with terminally ill children.

As Josie tells Leanne her story, she takes comfort in her experience.