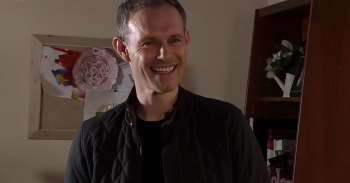 Nick Tilsley was born on Coronation Street and drama has followed him ever since.

He’s been played by three actors, most recently Ben Price, who took over the role in 2009.

The character has been in and out of the show over the years, with numerous jobs and relationships. And now he’s been talked about as the cobbles super-villain.

Has Nick Tilsley gone bad? Or has he always been that way…

‘Nicky’ was incredibly close to his father until Brian was stabbed to death in 1989. Gail’s second husband Martin Platt then adopted Nick and his surname was changed, but it went back to Tilsley when Nick’s gran, Ivy Brennan, made it a condition of her will in order for him to inherit her house.

This is particularly true of David, whose rivalry with his brother culminated in a car accident after Nick slept with David’s wife, Kylie.

Nick was left brain damaged after the crash, caused by David, and it resulted in violent mood swings and aggressive behaviour.

After Nick left Weathefield in June 2017, he returned in October 2018 and was met with a frosty reception from David, who was angry at his brother for not being there when David was raped by Josh Tucker in March of the same year.

When Nick found out what had happened, he vowed to stay in town and support his family, but a vengeful ex-wife soon threw a spanner in the works. Needing £40K to pay her off, Nick robbed his own gran, Audrey Roberts (Sue Nicholls) of her £80K inheritance and pinned the blame on her late conman lover, Lewis Archer.

David, however, found out the truth and blackmailed Nick into going into business together. They’ve opened their own barbershop on the cobbles, but with the police sniffing round Nick’s finances after the factory roof collapse, could they be on their way to prison?

After a stint with his uncle, Stephen, in Canada, Nick (then Adam Rickitt) returned in 1997 to study PE at college. But his teen marriage to Leanne Battersby (Jane Danson) caused money troubles and Nick became an artist’s model.

Another few years in Canada followed and on his return, he found work in Underworld – a factory that was to crop up in his career path numerous times.

Nick first bought into the factory alongside Carla Connor (Alison King) in 2010, but their partnership didn’t last long and he decided to open his own bar, The Joinery. The Joinery later became the Bistro, which he ended up selling to Robert Preston before leaving in 2017.

When Nick returned in 2018, he owned a restaurant in Nottingham. When he decided he was sticking around, he bought back into the factory but it turned out the money belonged to his secret wife, Elsa.

Once he paid Elsa off with his stolen funds, he went into business with brother David and the barbershop, but funds are tight – especially now the factory roof has collapsed.

Nick has been married four times to three different women, but it’s undoubtedly Leanne who his heart truly belongs to.

The pair first got hitched as rebellious teenagers, but things went wrong when he began writing to the man who’d murdered his father under Leanne’s name. Darren turned up and tried to rape Leanne and she was furious with Nick for putting her in danger.

When she then became pregnant with Nick’s baby, he pressured her into having an abortion and their marriage never recovered.

He was the object of Todd Grimshaw’s (Bruno Langley) affections for a while, that saw the show’s first gay kiss, and then he was engaged to Maria Connor (Samia Longchambon).

But he rekindled things with Leanne in 2010, despite the fact she was engaged to Peter Barlow (Chris Gascoyne). After her marriage to Peter ended, Leanne and Nick gave things another go, and set the date for their second wedding for Christmas Day 2012. It didn’t go ahead after he discovered she’d been tempted to get back with Peter.

They eventually married in January 2013 and lived happily ever after – until August 2013 when the truth about Nick’s one-night stand with Kylie was revealed. After the car accident and the brain damage, Nick ended his marriage to Leanne when he became violent with her, afraid he would hit her again.

He embarked on a fling with Erica Holroyd (Claire King) in 2014, and she fell pregnant, but by that point his affections had turned to Carla. When Erica lost the baby, Nick decided to pursue a relationship with Carla and the pair became engaged.

Their marriage might be the shortest in Corrie history when he discovered at the ceremony she’d slept with Robert. Although Nick went ahead with the vows, he decided the union wasn’t to be and ended their marriage a mere hours later.

Leanne then fell pregnant with Steve McDonald’s baby and Nick, having realised he still loved her, agreed to pretend he was the dad. But the lie didn’t last long when Steve (Simon Gregson) confessed all and Nick felt pushed aside as Steve took on daddy duties.

A trip to the seaside in May 2017 saw Nick stuck in quicksand and as his life flashed before his eyes, he realised he needed to leave Weatherfield – and Leanne – behind. He went without saying goodbye.

He returned in October 2018 to be by Leanne’s side when she was involved in a near-fatal car smash, proving he’d never stopped loving her – even though it turned out he’d married someone else in the 18 months he’d been away.

He divorced Elsa Tilsley, using his stolen funds to get rid of her, and has convinced Leanne they are meant to be. But for how long this time?

Nick’s long-running feud with Peter has often caused him trouble. The fact that they always seem to fall for the same women doesn’t help matters.

When Nick decided to pursue Leanne again in 2010, she was engaged to Peter. The pair had an affair, but she decided to stick with Peter and stay faithful after Ken Barlow (William Roache) caught her and Nick at it.

A jealous Nick then saved Peter’s life when the tram crashed into The Joinery during Peter’s stag do, and even tried pretending to be Peter’s friend to encourage the alcoholic to go back on the booze.

The truth about Nick and Leanne’s affair came out at Peter and Leanne’s wedding blessing in February 2011. Peter later threatened to kill Nick, but spared his life as Nick had saved his.

Peter continued to come between Nick and Leanne, causing upset on their wedding day in 2012, and igniting Nick’s jealousy again in 2017.

It seems they’re currently united following the factory collapse though. Peter is trying to protect Carla, and Nick out to protect himself, but they have a common goal in keeping the police at bay. How long this uneasy alliance will last though, who knows.

In 2018, show boss Iain McLeod announced there would be a new super-villian terrorising Weatherfield.
He told how the show was designing a character “who can stay in the show forever as an antagonist just messing up everyone’s lives. We’re going with this character on this journey.

Rumours have since been rife that Nick is that super-villain. It seemed to be confirmed when he stole Audrey’s money, and now the factory roof has collapsed, claiming the life of Rana Habeeb and we know someone tampered with it, making it unsafe.

With Nick’s name firmly in the frame, is he the latest Street baddie?

“As much as I’d like to stop and play today’s little game, I’m busy. I’m sure you’ve got some kittens to drown. Excuse me.” Nick tells Tracy to mind her own business when she taunts him on the day of Peter and Leanne’s wedding blessing.

Is Nick one of your favourite Corrie characters? Leave us a comment on our Facebook page @EntertainmentDailyFix and let us know what you think!