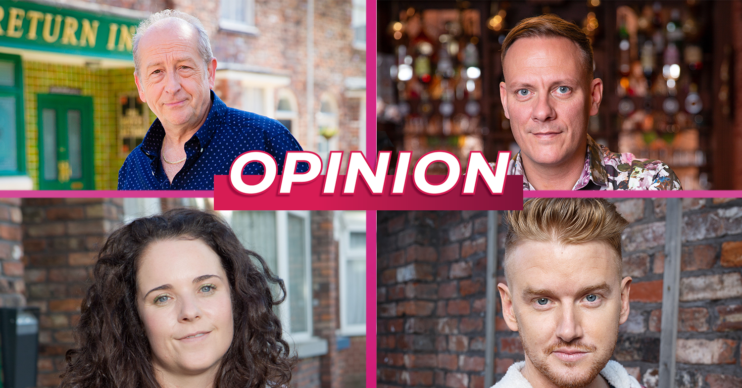 Time for some drastic action

Over the years Coronation Street characters naturally come and go, as in all soaps.

But when characters are in the show for a long time, they can often fade into the background.

Or they becoming so annoying we can’t stand watching them.

Sean is one of those characters who hasn’t been used as much over the last few years. When he was brought in, Sean had some really great storylines.

Remember Sean becoming homeless? A great storyline that showed how anyone can fall on terrible times.

But in recent times, he’s just a bit character.

Actor Antony Cotton mentioned that there was potentially a storyline where someone from Sean’s past came back.

We NEED to see that! Perhaps bring back Violet and Sean’s son.

Similar to Sean, Izzy is another character who has faded into the background. We only see her in factory and pub scenes.

Her last major storyline was when she began using marijuana to relieve her chronic pain, which was in 2016.

Then in 2017, Izzy was devastated when her sister Katy was killed in an off-screen car accident (which I felt was a little unnecessary, but that’s another feature!).

Izzy isn’t being used to her full potential as there is a lot Corrie could do with her character. Bring back Owen, or give her and Jake a storyline.

I hope she gets more of a role in Gary’s predictable unravelling, considering she is the mother of his child.

Failing that,  give her a dramatic death storyline!

Now I know I’m not the only person who wants to see Geoff killed off (Charlotte the chicken needs to be avenged).

However, I would like to see him face justice first.

As you all know, Geoff has been abusing Yasmeen for well over a year now and he has a lot of people thinking that he is the victim.

This is how I’d like to see the storyline go: Have Geoff caught out and sent to prison and Yasmeen obviously released.

But in a year or two’s time, Tim gets a call to say his father has been killed in prison.

It would be very interesting to see how they all handle his death.

As fans know, Gary is currently in the middle of a huge storyline. He killed Rick Neelan last year and accidentally killed Rana when he tampered with the factory roof.

Do I believe Gary is redeemable? Yes. But would I also like to see him dramatically killed off? Hell, YES!

At the end of this year, Coronation Street will be celebrating 60 years. Iain MacLeod has already confirmed the ‘Hollywood stunt’ has been scrapped (which I am very sad about, I won’t lie).

But could we see the death of a major character? If so, my hope’s are for Gary to be the victim!

Like Sean and Izzy, Seb does have a lot of potential.

In his first two/three years on the show, we saw huge character growth from him and I loved his involvement in the Pat Phelan storyline.

I also loved his involvement in the human trafficking storyline. However now I feel like they’ve put him in this love triangle which feels pretty pointless.

He and Emma were together for, like, five minutes and it’s clear he and Alina want to be together.

Next week, Abi and Seb learn the twins Charlie and Lexi are moving to Australia. Let’s see the kids brought back into their lives properly.

Otherwise… what is he still around for?