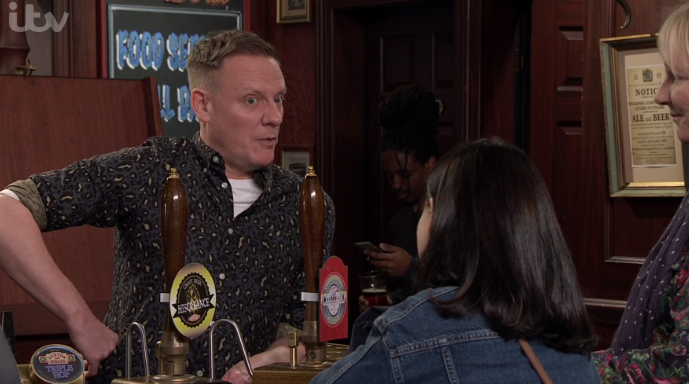 Antony revealed he had a storyline coming up last year

Coronation Street viewers have been left confused over Sean Tully’s ‘missing’ storyline, which was reported to take place last year.

In August last year, Sean actor Antony Cotton spoke about renewing his contract on Corrie and an upcoming storyline.

He told the Daily Star: “I had a meeting about my future. I didn’t sign up straight away. You have to negotiate a little bit!

Speaking about a storyline, he said: “Towards the end of this year, I’ve got a big storyline.

“I will be working with someone that the audience may have seen before… maybe someone is returning.”

The quotes caused fans to speculate that viewers were set to see the return of Sean’s friend and mother of his son, Violet Wilson.

However, now they’re wondering what happened to the storyline, as it never happened.

In a Digital Spy forum, one fan wrote: “I remember Antony Cotton saying he was getting a big new story summertime, I think it was last year. I was really curious about it.

“Weirdly Inside Soap has never mentioned it since even though it was a while ago meaning in theory filming should have started on it months ago.

“Was it ever said what this story of his actually was, or if someone was returning, who it was coming back for him?”

One person responded saying: “That was at the end of August as far as I can tell you, there’s been no confirmation about his new story or returning character at all. How weird!

“I bet it’s either top secret or he’s been exaggerating all along. Though it would be good for Sean if faces from his past do return, not just because it will give him something to do, but also he would serve more purpose if there was a return.”

Another added: “Yeah sounds odd. Wonder if it was scrapped or they couldn’t get the returning character back?”

One responded to the comment saying: “That makes perfect sense, I bet you’re bang on the money there! A shame though if that’s what happened.”

The next episode of Coronation Street airs at 7:30pm for an hour.